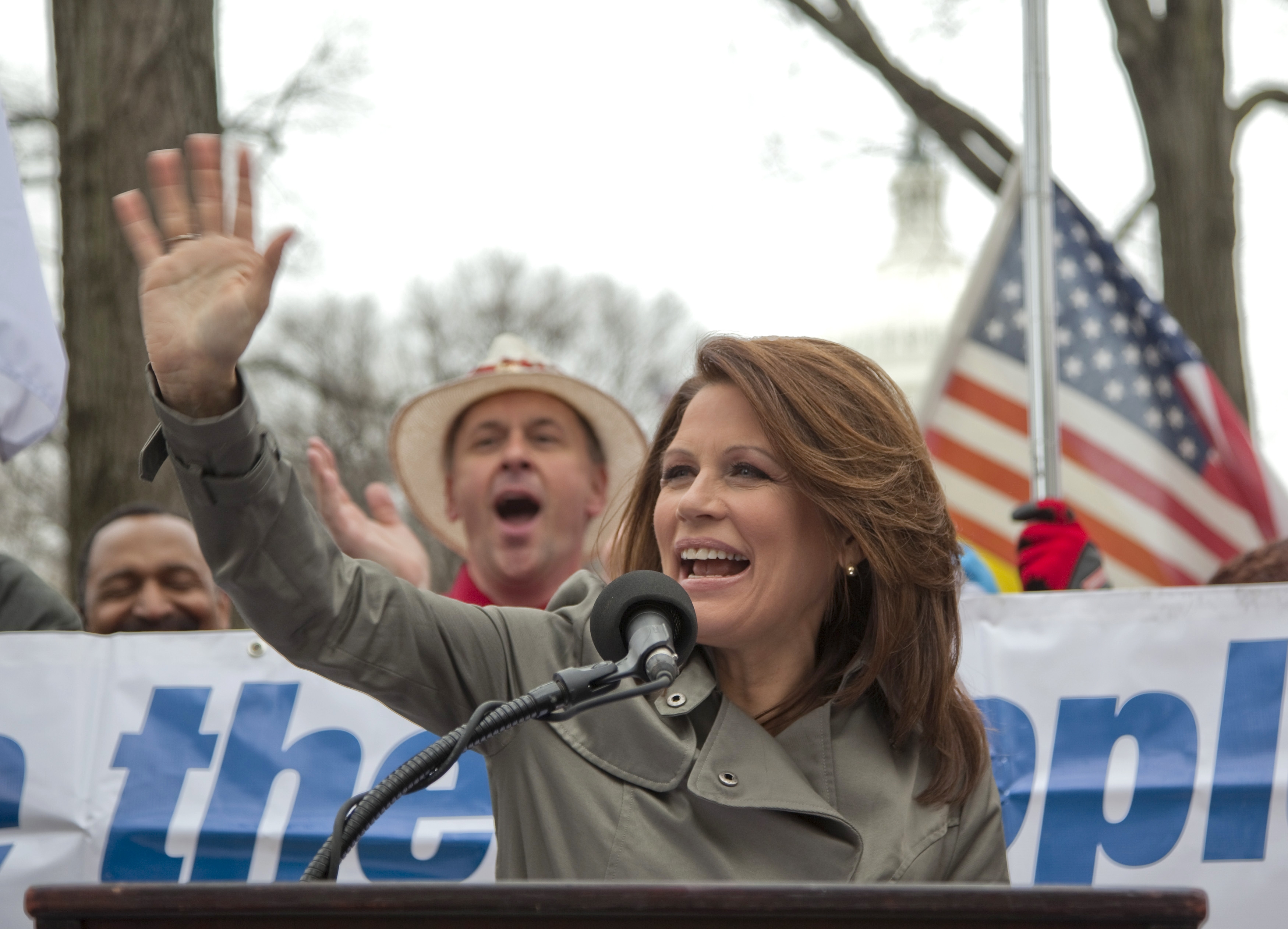 Around 200 Tea Party protesters gathered on Capitol Hill today for a rally intended to pressure congressional Republicans to stick to their guns on cutting spending. The current Continuing Resolution, a bill that keeps the government funded and operating, expires next Friday. Lawmakers hope to be able to pass a spending bill that would cover the rest of the fiscal year to September 30th.

The crowd was significantly smaller than the rallies with thousands attending last year at the height of the health care debate. But the crowd was still energized with its anti-government spending message. They erupted in cheers to "cut it or shut it" numerous times. They waved the usual "Don't tread on me" flags and held signs that read "Extreme Spending Requires Extreme Cuts" and "Remember your promises. We do." Another sign said "Obamacare- Bend over and Cough."

But two messages from Tea Party Patriots to lawmakers were clear: the members do not want compromise and they are still watching members of Congress on spending.

"The American people want substance - meaningful cuts," said Tea Party Patriots National Coordinator Jenny Beth Martin. "Not self-serving symbolism that Congress throws at the American people when patting themselves on the back."

Numerous lawmakers spoke at the rally to assure the Tea Party that they are listening.

"Let's go pick a fight!" yelled Rep. Mike Pence (R-Ind.), who said a shutdown could be necessary to protect everyone's "children and grandchildren."

"If liberals in the Senate would rather play political games and shut down the government instead of making a small down payment on fiscal discipline and reform, I say shut it down," Pence said to applause.

Tea Party favorite Rep. Michele Bachmann (R-Minn.) told the crowd that Democrats are the ones who want to shut the government down.

"They want to shut government down and use tea party as a scapegoat and say it's the Tea Party's fault," she said.

But the Republican many Tea Party members across the country are watching as lawmakers try to hash out a seventh Continuing Resolution to keep government operating is House Speaker John Boehner. Boehner is in the difficult position of trying to satisfy Tea Party demands while finding a way to fund the government through the end of the fiscal year so that members can move on to other difficult business -- like raising the debt ceiling, a vote Bachmann also said she would oppose.

Tea Party Nation sent a message to its members today saying that "Boehner must go" when there were reports that the Speaker had compromised with the Senate on a number lower than the House-passed bill with $61 billion in cuts.

When asked about the threat at a press conference today, Boehner said he was fine with it.

"I'm glad that they're engaged in the process," he said. "You know, I said over a year ago that we should talk with the Tea Party folks, that we should listen to them and we should walk amongst them. I don't feel any differently about it today. Any time Americans want to engage in their government...we should welcome that."

One of the 87 freshmen elected with Tea Party help, Rep. Joe Walsh (R-IL), told the crowd that they were trying to change the way Washington worked. He told them to "pat us on the back when we do something right." But Walsh also told them to "have that boot ready" to kick where the sun don't shine if they get off track.

An act that Speaker Boehner may feel is happening already.