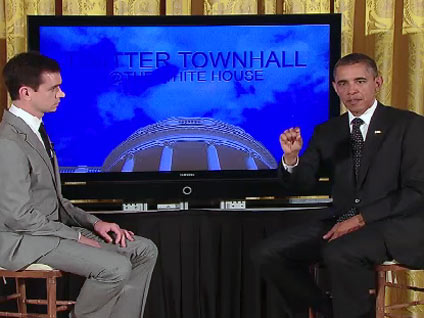 President Obama said Wednesday it is time for NASA to "revamp its vision" for space exploration in order for America to find "the next frontier out there" - and ultimately make it to Mars.

At his Twitter town hall event Wednesday afternoon, Mr. Obama talked about his vision for the future of the space program, and noted that while America is "still a leader in space exploration," it was time for the U.S. to "start stretching the boundaries" in space.

"Frankly, I had been pushing NASA to revamp its vision," the president said. "We're still using the same models for space travel that we used for the Apollo program 30, 40 years ago. Now what we need is that next technological breakthrough."

NASA is currently preparing for the 135th and final mission of its 30-year shuttle program, scheduled for Friday.

Even while praising the recent accomplishments of NASA, Mr. Obama contended that it was time for the program to push for new technological achievements.

"Rather than keep on doing the same thing, let's invest in basic research around new technologies that can get us places faster, [and] allow human space flight to last longer," he said. "What you're seeing now is NASA, I think, redefining its mission."

The ultimate goal, he said, was to "get to Mars."

"A good pit-stop is an asteroid," he added, before noting that "we haven't identified an actual asteroid yet."

Last year, Mr. Obama detailed some specific milestones he wanted NASA to reach, including sending astronauts to an asteroid for the first time and orbiting Mars by the mid-2030's.

Today, however, Mr. Obama argued that in order to get to a point where such advanced space exploration was in the realm of possibility, "we're gonna need some technological breakthroughs that we don't have yet."

He suggested that the private sector should be a larger player in the space game - so that average Americans might one day be able to "buy a ticket" to space.

Meanwhile, he said, the government should be focused on making scientific breakthroughs.