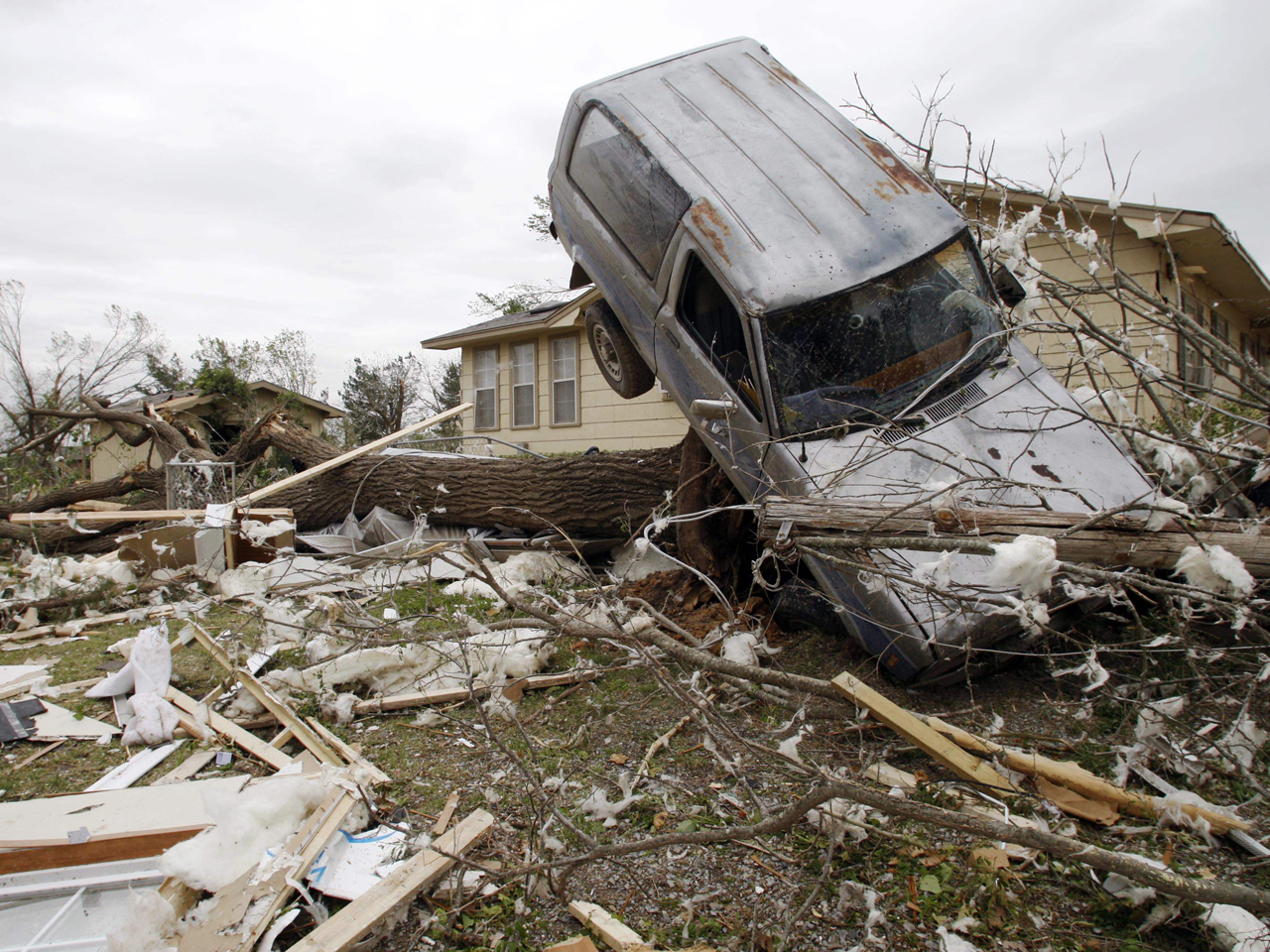 CRYSTAL SPRINGS, Ark. - Powerful spring storms roared through parts of the South on Friday, toppling trees, smashing buildings and killing at least nine people, including two sets of parents and children who were huddled together as the winds raged outside their homes.

It was the deadliest storm of the season so far. Several tornados accompanied the onslaught, but much of the damage was attributed to straight-line winds — sudden, violent downbursts that struck with hurricane force in the middle of the night.

CBS News correspondent Don Teague reports the cause of Friday's tornados is cold dry air pushing east from the Midwest, colliding with warm moist air from the Gulf of Mexico. The result: a moving line of dangerous storms.

Last year, the storm season got a slow start because the Gulf of Mexico was cool, Teague reports. This year, it's warm and more humid - and that heat and humidity is coming northward. And that's what's causing all the tornados.

On average, April sees 163 tornaods. But this April is only half over and there has already been 160 tornados.

As the storm howled through Crystal Springs, Eden Davis woke up, grabbed her young child and sat on the edge of the bed waiting to pull a mattress over both of them to shield the pair from flying debris.

"I've never been so nervous about a storm," she said. "I was asleep, but my fiancé called me and told me to wake up and that I needed to watch the news because the weather was getting real bad."

Forecasters warned of approaching danger as much as three days earlier, but the winds up to 80 mph and repeated lightning strikes cut a path of destruction across a region so accustomed to violent weather that many people ignored the risk — or slept through it.

The storms began late Thursday in Oklahoma, where at least five tornadoes touched down and two people were killed. The system then pushed into Arkansas, killing seven more. Dozens of others were hurt.

By midday Friday, the storms marched into Tennessee, Louisiana and Mississippi. At least three tornados touched down in Mississippi. CBS News correspondent Randall Pinkston reported Mississippi residents headed early warnings, and so far - no deaths have been reported.

Arkansas Gov. Mike Beebe said he had never seen the state suffer so many deaths from straight-line winds. Tornadoes and floods cause most of Arkansas storm-related fatalities.

"Just trees blowing on people's residences — I don't recall anything even approaching this," Beebe said.

Unlike tornadoes, which develop from columns of rotating air, straight-line winds erupt from a thunderstorm in unpredictable downdrafts, then spread across the landscape in all directions.

Teams from the National Weather Service worked Friday to learn more about what caused the damage.

In the Arkansas town of Bald Knob, 6-year-old Devon Adams died when the top of a tree more than in diameter crashed through his home while he was sleeping.

Residents of the small town of Tushka, Okla., wondered what would become of their community after a twister damaged or destroyed nearly every home along the two main streets. The only school — a collection of buildings housing grades K-12 — was all but gone.

"It's hard to deal with because we're a small community with limited resources. It's hard to do the cleanup," Mayor Brickie Griffin said.

At least 25 people were hurt as the tornado plowed through the town of 350 before dawn. At least a dozen homes and businesses were destroyed.

Stacy George, who lives across the street from the school, slowly recovered items from the rubble of her home, which had shattered windows and a collapsed roof. A pickup truck had been blown into the side of the house. But George's husband and 20-month-old son survived.

"We're basically starting over," she said, laying out clothes, cowboy boots, a penny jar, a lamp and a chair in her driveway.

"We're trying to salvage what we can," she said. "It's devastating. It's just horrible. Thank God we have so much help."

Easton Crow, a junior at Tushka High School, drove by the building after the storm. He saw missing roofs, crushed vehicles and textbooks scattered everywhere.

"I'm heartbroken. This is where most of us grew up," Crow said. "I'm just in awe that in a few seconds, memories that have been built were taken."

The school was to stay closed for the rest of the academic year, and officials were looking for an alternate place to hold classes.

The owner of the Atoka Trailer Manufacturing plant said it would cost millions of dollars to rebuild the factory, which made trailers for hauling heavy equipment.

"Twenty-four hours ago, this was an 80,000-square-foot heavy manufacturing facility. At the moment, it's a pile of rubble," Ryan Eaves said. "This building was a shining bright spot for the community. To think it could be overtaken like this is overwhelming."

He said he would shift work for the plant's 60 employees to another factory three miles away.

Back in Crystal Springs, authorities surveyed the damage at the home of 24-year-old Jeffrey Gibbs, who died with his 18-month-old daughter, Rylin, after lightning struck a tree and the top of it fell into their house.

Davis is a friend to Gibbs' wife, Rebecca.

"It's been a complete tragedy," Davis said. "No one expects to lose a child and a husband at the same time."

Neighbor Melissa Wright, who lives in a mobile home across the street with her mother and daughter, said her mother was outside and saw the lightning strike.

"I have a 3-year-old girl, and that's my worst fear," she said. "You don't think that when you're lying in your bed, something like this could happen to you."

In Little Rock, the storms intensified shortly before 2 a.m., catching many people asleep. But the city's sirens were wailing when the weather hit.

One man was killed when a tree fell on his recreational vehicle.

A woman identified as a nurse and her 8-year-old son died when an oak tree fell into the boy's bedroom. A baby sleeping in a nearby room was not injured, police said.

At daybreak, the tree still leaned against the home's back bedroom, exposing some of the little boy's treasures: a stuffed frog, a toy truck.

A few of the woman's fellow nurses huddled around her sister outside the home.

"She doesn't even want to come near the house," said Theresa Travis, a doctor who worked with the dead woman, who had not been publicly identified.

Friends and authorities piled some of the surviving baby girl's things in the driveway: a pink Disney princess suitcase, a baby doll, a Huggies box filled with clothes. Chain saws buzzed as workers hacked away at the tree.

"You'd think that doing hospice, we'd be ready for death," Travis said. She shook her head.