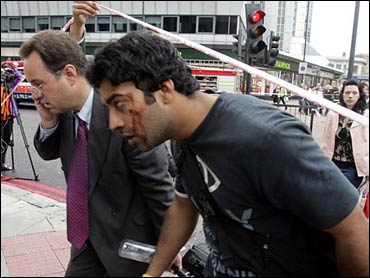 Tony Blair (video)
said it was clear the "barbaric" attacks were designed to coincide with the opening of the G-8 summit in Gleneagles, Scotland.

"We will not be terrorized," Blair said after returning to London from the summit. He said the terrorists were "trying to use the slaughter of innocent people to cow us. They should know they will not succeed."

Blair promised an intense police hunt for those responsible for the attacks, London's worst since World War II. He said he knew most Muslims worldwide "deplore this act of terrorism."

London police officials confirmed 37 fatalities, including at least two in the bus blast.

Three U.S. law enforcement officials said at least 40 people were killed in all the attacks. They spoke on condition of anonymity and said they learned of the number from their British counterparts.

A group calling itself "The Secret Organization of al Qaeda in Europe" posted a claim of responsibility for the blasts, saying they were in retaliation for Britain's involvement in Iraq and Afghanistan. The Web statement, republished on the site of the German magazine Der Spiegel, could not be immediately confirmed.

The explosions hit three subway stations and a double-decker bus in rapid succession beginning at 8:51 a.m. (3:51 a.m. EDT) and ended about 40 minutes later when a blast ripped the top off a bus. Authorities immediately shut down the subway and bus lines but said limited service was expected to resume Thursday night.

The attacks came a day after London was awarded the 2012 Olympics.

Deputy Assistant Commissioner Brian Piddick said there no warnings in advance of the attacks, and police have received no claims of responsibility. He said there had been no arrests and it was unclear whether suicide bombers were involved.

President Bush (video)
offered his condolences to the British people and warned Americans to be "extra vigilant."

CBS News Correspondent Jim Stewart reports the U.S. is raising the terror alert level to orange – or "high" – for trains and other mass transit system, but not airlines. Homeland Defense Secretary Michael Chertoff said there was "no specific, credible information" suggesting an attack in the U.S. was imminent.

Much of Europe also went on alert. Italy's airports raised their alert level to a maximum. Other countries that announced increased security at shopping centers, airports, railways and subways included the Czech Republic, Hungary, Russia, the Netherlands, France and Spain.

In New York, the U.N. Security Council voted unanimously to condemn the carnage and vowed to bring those responsible to justice.

"These vicious acts have cut us all to the core, for they are an attack on humanity itself," Secretary-General Kofi Annan said in a statement. "Today, the world stands shoulder to shoulder with the British people."

Bloodied and bandaged witnesses (video)
reported panicked crowds fleeing the blast sites. A witness at the bus explosion said the entire top deck of the bus was destroyed.

"It was chaos," said Gary Lewis, 32, who was evacuated from a subway train at King's Cross station. "The one haunting image was someone whose face was totally black and pouring with blood."

London Mayor Ken Livingstone said the blasts that ripped through his city were "mass murder" carried out by terrorists bent on "indiscriminate ... slaughter."

London police said at least 700 were wounded. Among them, at least 45 were in serious or critical condition, including amputations, fractures and burns, hospital officials told The Associated Press.

"This was not a terrorist attack against the mighty or the powerful, it is not aimed at presidents or prime ministers, it was aimed at ordinary working-class Londoners," said Livingstone, in Singapore where he supported London's successful bid to host the 2012 Olympics. "We know what the objective is. They seek to divide London."

Denying an earlier report, Israeli Foreign Minister Silvan Shalom said that Israel was not warned by Scotland Yard in advance of the blasts.

In Scotland, the leaders of the G-8 countries – the United States, Britain, Canada, France, Germany, Italy, Japan and Russia – planned to proceed with discussions on the issues of global warming and African poverty that Blair has made the centerpiece of the gathering.

"All of our countries have suffered from the impact of terrorism," Blair said in a statement on the leaders' behalf. "Those responsible have no respect for human life."

The summit was already protected by extraordinary security measures that local authorities said were sufficient for now.

Police said incidents were reported at the Aldgate station near the Liverpool Street railway terminal, Edgware Road and King's Cross in north London, Old Street in the financial district and Russell Square in central London, near the British Museum.

Bradley Anderson, a subway passenger, told Sky News that "there was some kind of explosion or something" as his train reached the Edgware Road station in northeast London.

"Everything went black and we collided into some kind of oncoming train," Anderson said.

Simon Corvett, 26, who was on an eastbound train from Edgware Road station, said: "All of sudden there was this massive huge bang."

"It was absolutely deafening and all the windows shattered," he said. "There were just loads of people screaming and the carriages filled with smoke.

"You could see the carriage opposite was completely gutted," he said. "There were some people in real trouble."

One witness, Darren Hall, said some passengers emerging from an evacuated subway station had soot and blood on their faces. He told BBC TV that he was evacuated along with others near the major King's Cross station and only afterward heard a blast.

"I was on the bus in front and heard an incredible bang, I turned round and half the double decker bus was in the air," Belinda Seabrook told Press Association, the British news agency.

She said the bus was packed with people. "It was a massive explosion and there were papers and half a bus flying through the air," she said.

London's cell phone network was working after the explosions but was overloaded and spotty, limiting communication.

European stocks dropped sharply after the blasts, with exchanges in London, Paris and Germany all down about 2 percent. Insurance and travel-related stocks were hit hard, and the British pound also fell. Gold, traditionally seen as a safe haven, rose.