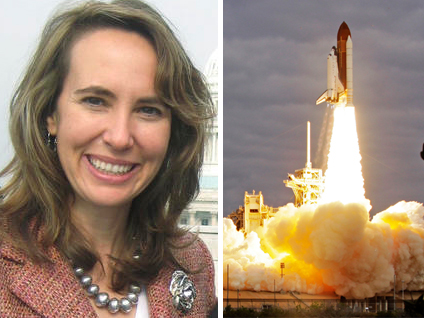 CAPE CANAVERAL, Fla. - Shuttle Endeavour's' commander, Mark Kelly, can't wait to see his congresswoman wife for the first time from orbit and show her some cosmic views of his spaceship and the planet Earth.

Kelly last saw Arizona Rep. Gabrielle Giffords on May 15, the day before he rocketed into space on the next-to-last shuttle flight. Giffords underwent surgery a few days later to repair her skull. She was critically wounded in a shooting in January.

The half-hour videoconference is planned for Friday.

Kelly said Thursday that his wife still has bandages around her head, so he won't be able to see the results of her skull reconstruction. Doctors put in a synthetic implant to replace bone that was removed to allow for swelling after the shooting.

"I haven't really thought about what to expect," Kelly said in a news conference from the International Space Station.

Kelly said he speaks daily to Giffords, using the space station phone. It's usually at the end of his work day in space, which is her morning in Houston. She's upbeat as always, he noted.

"It will be nice to do it via video, be able to see how she's doing and for her to join us on board the space station for a little bit," he said.

The commander said he will conduct the video session from the space station's cupola, a glassed-in lookout.

"Give her a chance to look outside, look at the space shuttle docked to the space station," he said. "That's an incredible view to see Endeavour sitting there with the planet just below its tail ... you're pretty close."

Shortly after the news conference, a smoke alarm echoed throughout the shuttle-station complex. The nine space travelers scrambled to see if anything was burning. The Russians on board quickly assured Mission Control there was no smoke or even a smell of smoke. Flight director Derek Hassmann later said work in the area stirred up dust, which triggered the alarm.

The crewmen used a long inspection boom to check for any signs of micrometeorite damage. They will hand over the laser-tipped tool to the space station Friday, during the fourth and final spacewalk of Endeavour's mission. The pole will be used for future repair work in hard-to-reach areas of the orbiting outpost.

One of the spacewalkers, Mike Fincke, will become the country's space champ Friday, breaking the current U.S. record of 377 days in orbit. He said Thursday that even Russia's world record of 803 days will be "long forgotten when humans really start to explore the solar system."

The 3-D shuttle images gathered early Thursday are being analyzed by experts on the ground. Hassmann said nothing worrisome jumped out at first glance. NASA wants to make sure Endeavour's heat shield is intact before clearing the shuttle to come home on June 1.

It will be a landing in darkness, more difficult than the usual daytime touchdowns. Kelly said it's unlikely his wife will return to Kennedy Space Center, given the landing time of 2:35 a.m. She was present for his launch.

This is the last flight for Endeavour. It will be retired to a museum in Los Angeles following its decommissioning.

Atlantis will make the final space shuttle voyage in July.

Kelly said the shuttle fleet has been the workhorse of the U.S. space program for 30 years, and "an incredible success."

"It's what literally built the space station," he said. "So to retire the space shuttle is pretty significant and the last flight, it's bittersweet. But I think it's time that we move on and do something equally exciting, build a new vehicle and maybe go to new destinations."