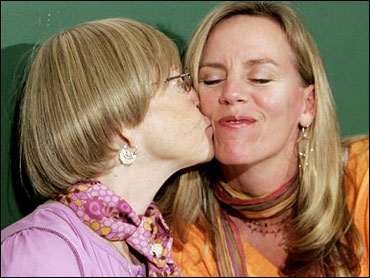 Even as they cheered the Supreme Court's decision to uphold Oregon's assisted-suicide law, supporters said Tuesday they expect the outcome to be challenged in Congress.

"I've always thought that, at some point, this is coming back to the halls of Congress," Sen. Ron Wyden, D-Ore., said in an interview. "My sense is, with the elections coming up, people will make an issue of it."

Republicans have expanded their majority in the Senate since then, and many new lawmakers are more conservative than those they replaced, Wyden said.

David Fidanque, executive director of the Oregon affiliate of the American Civil Liberties Union, said opponents of assisted suicide could probably get an easy majority in the House and a smaller majority in the Senate, though perhaps not enough to stop a filibuster. Sixty votes in the 100-member Senate are needed to block a filibuster.

"If there's another congressional battle, it could be very close," Fidanque said.

Wyden agreed, but he pointed to two developments that could help supporters defend the Oregon law, which the high court upheld on a 6-3 ruling Tuesday.

The court rejected a Bush administration attempt to punish doctors who help terminally ill patients die, saying that a federal drug law does not override the 1997 Oregon law used to end the lives of more than 200 seriously ill people.

CBSNews.com Legal Analyst Andrew Cohen calls the ruling a "significant defeat for the Bush Administration, which had fought hard to convince the Court that the federal laws governing doctors should have trumped Oregon's suicide law."

But the Justice Department indicates it will still fight assisted suicide by, as one official put it, ensuring that drugs are not used unlawfully, reports CBS News correspondent Peter Maer.

At least six other states have proposed, or are considering, some form of an assisted suicide law, with bills currently in the legislatures of California and Vermont.

The Oregon law was passed by initiative in 1994 and affirmed by an even larger majority of voters in 1997, within weeks of another Supreme Court ruling in a Washington state case that also backed states as the final authority for regulating medical practice.

"There's a lot of people out there who would love to have that law," said Charlene Andrews, a 68-year-old retired teacher who lives in Salem, Oregon, and is suffering from terminal breast cancer. She has not asked her doctor to prescribe a fatal dose of medication, but said she was glad the court upheld the law.

Wyden said the public showed its disgust after Congress approved a special law allowing doctors to reinsert a feeding tube for Terri Schiavo, a brain-dead Florida woman whose case became a national sensation.

Several senators, including some who opposed his efforts to block the Schiavo bill, told him later that "Congress had no business being involved" in such a personal decision, Wyden said.

The second factor is more local but may be just as important, Wyden said. Oregon Sen. Gordon Smith, a Republican who opposes the assisted-suicide law, said that the Supreme Court decision should be the final word.

Wyden called Smith's statement welcome and helpful, and he added that Republican senators who may be inclined to challenge the Oregon law should consider Smith's words carefully.