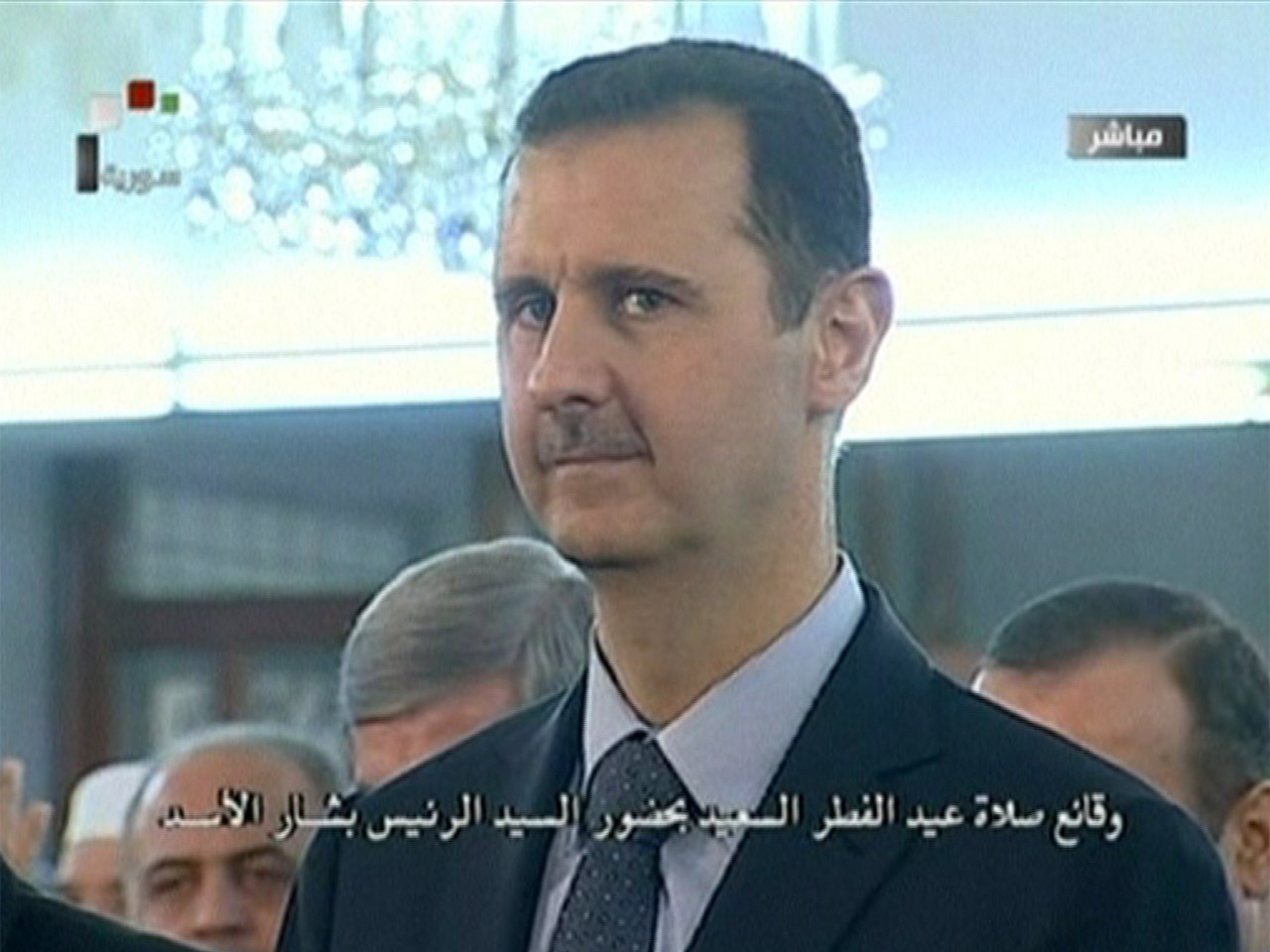 DAMASCUS, Syria Mortar rounds hit an upscale district of Damascus on Thursday as Syrian state TV broadcast images of President Bashar Assad attending prayers in the capital to mark the start of a Muslim holiday.

It was the Syrian leader's third public appearance in over a week as his regime tries to capitalize on recent gains on the battlefield against rebels fighting to oust him from power.

The president's regime vehemently denied reports by some Arabic broadcasters that his vehicle had come under fire en route to the mosque Thursday morning.

Minister of Information Omran Zoubi said in a statement that reports of Assad's convoy coming under attack were "absolutely untrue and mere lies."

Zoubi said Assad "came to the mosque driving his own car and shook hands with hundreds of people there," even claiming that life was "normal in Damascus."

While the president's mosque visit was apparently unaffected by the mortar fire, the Britain-based Observatory for Human Rights said three mortar rounds did land in the capital's district of Malki early in the morning. The neighborhood has rarely been targeted by opposition forces during the conflict, which last year brought the rebels and their battle to the heart of the capital.

A government security official told CBS News' George Baghdadi that many more mortars landed in other parts of the capital, including the Rawda and Doumar areas and elsewhere.

There were no immediate reports of casualties or damage in the shelling.

On Wednesday, Syrian government troops ambushed a large group of rebels trudging through a desert road northeast of Damascus, killing more than 60 fighters.

In the state TV broadcast, Assad, dressed in a suit, was seen praying in a mosque alongside Syria's grand mufti at the start of Eid al-Fitr, the three-day holiday that ends the holy month of Ramadan.

Assad's troops have recently been on the offensive in central Syria, making advances near the border with Lebanon and in the city of Homs, an opposition stronghold and Syria's third largest city.

In the north, where much of the territory has been under opposition control in the past year, rebels scored a rare victory earlier this week when they captured a major air base in the Aleppo province near the border with Turkey.

Syria's crisis started as a largely peaceful uprising against Assad's rule in March 2011. It turned into a civil war after opposition supporters took up arms to fight a brutal government crackdown. More than 100,000 people have been killed in the violence so far, according to U.N. figures.