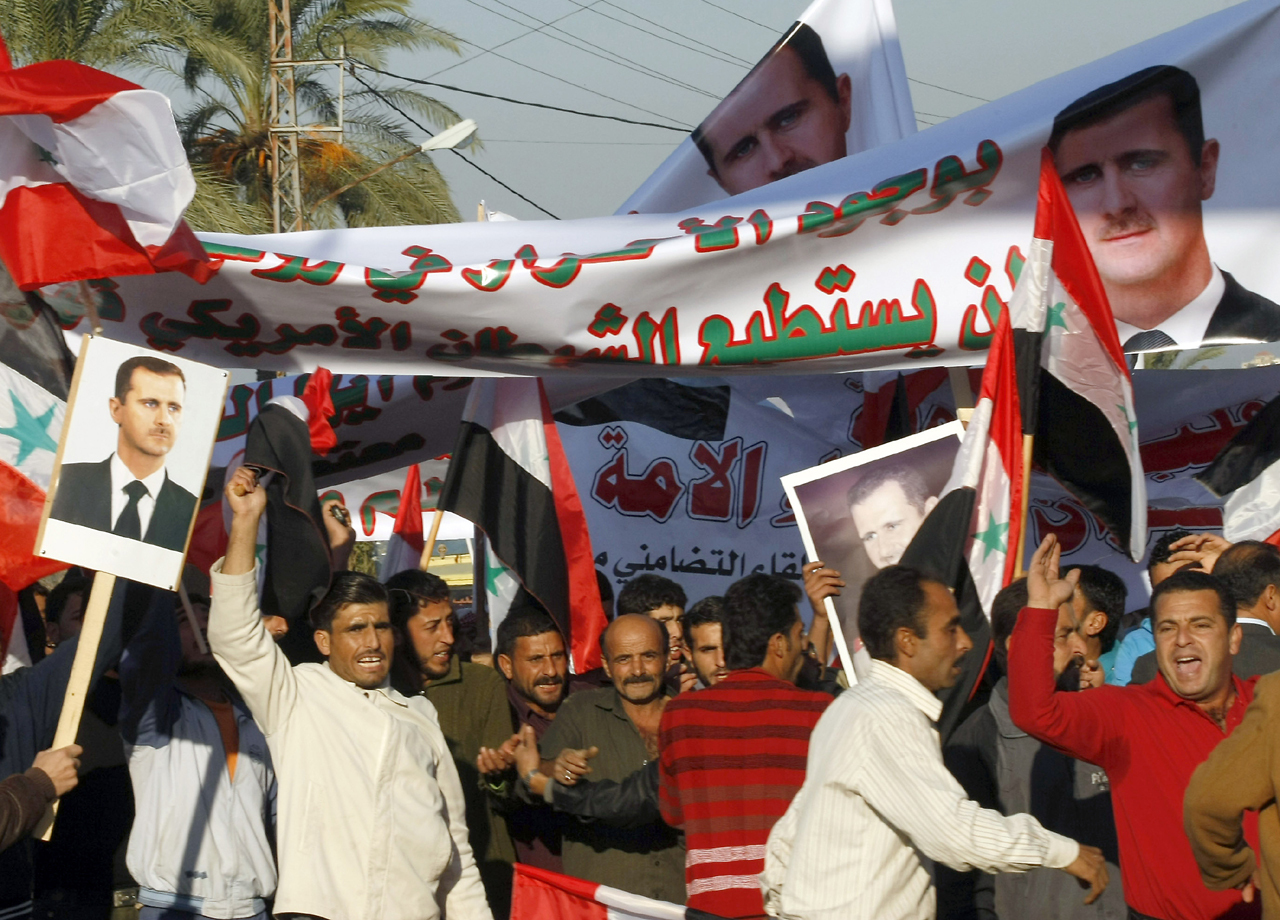 DAMASCUS - Syrian President Bashar al-Assad has said his forces would keep up the fight against the "terrorists" in the country, as Arab ministers were gathering in Cairo on Sunday to draw up sanctions against Damascus for pressing a crackdown against protesters and defying an ultimatum to allow in observers.

"At the first stage of the crisis we were gathering information and laying a map to know the whereabouts of the armed groups," Assad was quoted as telling a group of university students in a recent meeting. "After the month of Ramadan (three months ago), we started a qualitative operations. We directed severe and decisive blows to the terrorists. There will be no tolerance with them... we will follow them everywhere. ...

"The armed groups that terrify the Syrian citizens are divided into three groups: part of them belong to the Muslim Brotherhood, another part belong to the Takfiri Wahabi, and the third are those who have sentences to death or life imprisonment and who don't hesitate to commit such acts," Assad explained.

Assad's remarks have appeared on almost every Syrian private website.

Arab finance ministers on Saturday thrashed out a package of economic sanctions against Syria that would include the suspension of flights and freezing of government assets, a humiliating blow to a nation that was a founding member of the 22-member Arab coalition and considers itself the "beating heart" of the Arab nation.

If enacted by the foreign ministers later today, the new penalties would deal a stinging blow to an economy already suffering under sanctions from the European Union and the United States.

Syria's two most vital sectors, oil and tourism, which account for more than a third of the government's revenues, have all but come to a halt.

Turkish Foreign Minister Ahmet Davutoglu said he would join Sunday's meeting to harmonize his government's measures with those of the Arab League, saying that Ankara's former ally had missed its "last chance" by failing to heed the Arab ultimatum.

Ankara already has some measures in hand against Damascus, including a suspension of joint oil exploration and a threat to halt power exports.

Assad responded: "The dream of the Ottoman Empire is still alive for some, although they know that they are unable to achieve.....They are trying to exploit some parties which embrace religious slogans to extend their influence in the Arab world," he told the students, adding that Damascus was destined to face "all kinds of conspiracies."

"After we come up from the current battle victorious, don't expect that we will stay at east as long as we say 'no' the America," he said, underlining that "you will definitely see those Arab brothers who stood against us in Damascus to extend their apologies after the end of the crisis."

The Syrian military on Friday vowed to "cut every evil hand" that targets the country's security and said the killing of six pilots Thursday afternoon in an ambush was a "dangerous escalation" in violence that has consumed the country for more than eight months. The U.N. says more than 3.500 have been killed; Damascus says the death toll is much less.

Syria has barred foreign journalists and prevented independent reporting, making escorted trips the only official way to cover events within the country.

Assad blames the unrest on a foreign plot to destabilize Syria, saying extremists and terrorists - not true reformers - are driving calls to oust him.

Despite the violence, Assad still has a firm grip on power, in part because the opposition remains fragmented and he retains the support of the business classes and minority groups who feel vulnerable> Importantly, he also has iron loyalty of the military on his side.

There have been, however, growing reports of army defectors and armed civilians fighting Assad's forces.

"If the desertion of dozens of soldiers is called a defection, then all the armies in the world have defections," Assad told the students in his last statement.