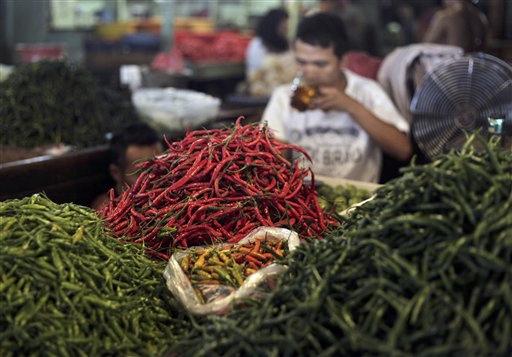 Surging food prices in India are forcing families to cut back on meat and vegetables. In Indonesia, they prompted the president to urge people to grow their own chili peppers. And in China, restaurant owners are feeling the squeeze.

Inflation is climbing across Asia as the cost of food jumps, echoing the previous global food crisis that peaked in 2008. While people in the U.S. and other wealthy Western nations will barely feel the effects of higher prices, getting enough to eat is a big challenge for tens of millions in Asia. Poor families typically spend more than half their household income on food and are bearing the brunt.

Wary of potential unrest, governments are trying to keep food price inflation from spilling into the rest of the economy. Officials face a tough dilemma as they raise interest rates to dampen inflation. Too fast and it will choke off economic growth, too slow and the problem could spiral out of control.

Liu Shaozhen, who runs a fast food restaurant in Beijing with her husband, said she now pays 225 yuan ($34) for a 20-kilogram tub of salad oil, nearly double what it cost when they opened the business in September. Rice costs nearly 40 percent more. But fierce competition means she cannot charge more or serve smaller portions.

"I'm not making any profits now and actually I'm losing money," said Liu, who charges 9 yuan ($1.36) for a plate of meat and vegetables on rice.

The World Bank says global food prices have hit "dangerous levels" after jumping 29 percent overall in the past year. It estimates costlier corn, wheat - and oil - have pushed 44 million people into extreme poverty since June.

The U.N. Food and Agriculture Organization says food costs have reached an historic high but recent good harvests are staving off the kind of food emergency felt in 2008, when shortages and skyrocketing prices caused riots in poor nations.

Other experts fear that the worst is not over yet.

Inflation in Indonesia powered to 7 percent in January and 8.2 percent in India - where the cost of vegetables skyrocketed by almost two thirds - while in China it was near a 28-month high as food costs jumped more than 10 percent. Analysts say Chinese inflation will head still higher in coming months because the government cannot quickly increase food supplies.

"Just three years after the terrifying food crisis of 2007-2009, prices of the most important commodity of all are skyrocketing," economists at global bank Credit Suisse wrote in a report on food price inflation.

"Asian inflation is amongst the most sensitive in the world to food price shocks and, despite the likely introduction of further food subsidies and other price controls, we have yet to reach the high water mark of the latest one."

Huge swings in prices are characteristic of the latest bout of food inflation.

In Indonesia, the price of chili peppers vaulted as much as 10-fold in recent months due to heavy rainfall that decimated crops. Some farmers took to arming themselves with machetes to guard their fields from chili rustlers and even President Susilo Bambang Yudhoyono weighed in, urging people to grow the spicy staple in their own backyards.

Food stall vendors in Indonesia's bustling capital, Jakarta, are resigned to living with lower profits because of the jump in chili prices.

"All I can do now is be patient, I guess," said Marliani, serving up a plate of rice with a boiled egg, chili and a handful of fried beans for which she charges 50 cents. "I can't raise prices, or I'll lose my customers."

Prices for red and green chili peppers, or "cabai rawit," have been volatile, rocketing to $22.20 per kilogram, 10 times their normal price, for several days in January before leveling off at around $10-$11 a kilo. Even at that price, it's still more expensive than beef.

The root causes of food price inflation are hotly debated, with explanations varying from country to country. But one common factor is extreme weather events that are occurring more frequently, wiping out crops. Floods in Australia, Pakistan and India have helped force up food prices, as have droughts in Argentina and Eastern Europe.

The U.N.'s food agency warned that China's worst drought in six decades is putting pressure on global wheat prices - already up a third since mid-November. Officials in China, the world's largest wheat grower, announced $1 billion in spending to alleviate the problem with emergency irrigation and cloud-seeding to make rain.

In India, onion prices shot up in January after unseasonable rains damaged crops in the western state of Maharashtra, the main producer. Anger over the high prices erupted into street protests, led by opposition parties, when prices for onions, a diet staple in South Asia nearly tripled to 80 rupees a kilogram in December and January. India responded by quickly importing onions from longtime rival Pakistan. Prices have since stabilized at 20 rupees per kilogram, helped by an export ban and a fresh harvest.

But overall food prices are still higher than before, according to residents, food vendors and restaurant owners. Indians are being forced to switch to cheaper substitutes, raising concerns about possible malnutrition.

"I stopped buying meat for my family as onion was a major ingredient in its cooking. My family shifted to eating seasonal vegetables, which cost much less," said Rajesh Kumar, a government clerk, with a wife and three children to look after.

In other places, political instability is pushing up food costs. Chocolate prices rose 12 percent in January thanks partly to strife in Ivory Coast, which placed a one-month ban on cocoa bean exports.

Asia's growing middle classes are also raising demand for food, as people with more income seek out meals with more variety. Economists say higher energy prices also play a role, not only through higher transport and fertilizer costs, but also by encouraging farmers to use more of their land to grow crops for biofuels.

In Beijing, a food vendor surnamed Zhang said she's earning more money because she has raised the prices of the pancakes fried with eggs she sells from the back of a tricycle. But she finds it harder to scrape by because her living costs have risen even more.

"I'm definitely spending more on food out of my daily income now than before," she said. "Food prices are high, but you have to eat anyway."