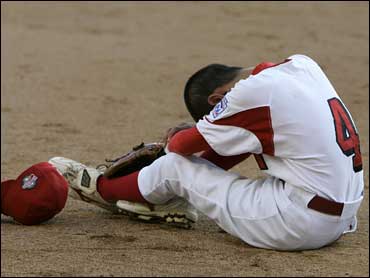 The bus was carrying the second-place team from Japan and a team from Taipei when it caught fire near Bucknell University after leaving South Williamsport at 6 a.m., Susquehanna Trailways spokeswoman Amy Brooks said.

The teams and their chaperones got off the bus on U.S. Route 15 and the driver called the fire department, Brooks said.

The fire probably started in the engine compartment and heavily damaged the rear of the vehicle, the William Cameron Engine Company said in a statement.

The U.S., represented by a team from Warner Robins, Ga., defeated Japan Sunday 3-2 on a walk-off home run by 12-year-old shortstop Dalton Carriker to win the Little League World Series. It was the third straight Little League championship for the U.S., the second straight for the state of Georgia.

Georgia reliever Kendall Scott struck out 10 and allowed one hit over five-plus innings to quiet Japan's bats after Georgia fell behind 2-0 early.

"I told Junsho that when you are a reliever these things can happen," Kubo said through a translator. "I told him that he has a bright future and not to let this homer affect that."