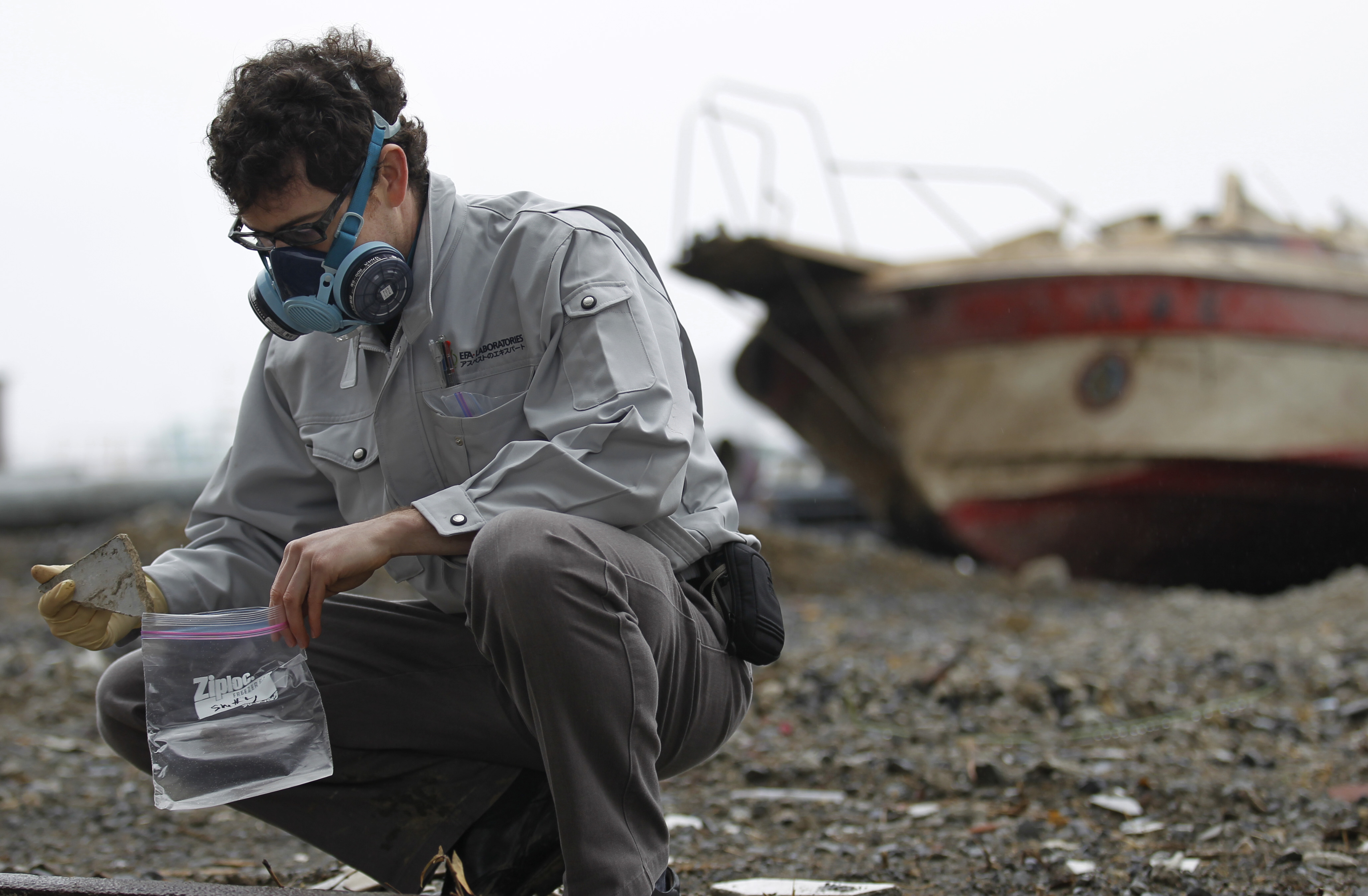 SENDAI, Japan - Inside the chunks of slate and wallboard smashed and scattered by Japan's tsunami hides a health risk that has been overshadowed by contamination from a leaking nuclear plant: the odorless and nearly invisible threat of asbestos.

Activists have found the cancer-causing, fibrous material in the air and debris collected from the devastated northeastern coast.

Levels in the air remain within Japan's safety range but are expected to rise significantly once cranes and cleanup crews begin their work in earnest, scraping and shaking loose the minuscule, white fibers from insulation and fireproofing layers.

Local officials are overwhelmed by the aftermath of Japan's March 11 earthquake and tsunami, including the swamped nuclear reactor that has leaked radiation as engineers struggle to restore its cooling systems.

The officials in hard-hit areas such as Miyagi prefecture — where Japan's respected emperor and empress visited tsunami evacuees Wednesday — acknowledge they have yet to focus on asbestos and the potential contamination of other such airborne particles.

Meanwhile, workers, volunteers and residents roam freely through the debris. Some wear masks; others don't, despite the plumes of dust that shoot up every time a giant steel claw grabs a load of debris. On windy days, particles swirl in the air. They sting eyes and irritate throats before leaving behind a thin layer of dust on whatever passes through.

"There are a lot of people going back into the rubble to search for valuables and photos," said Takuo Saitou, a Sendai-based attorney and a spokesman for a group tackling defective home issues in northern Japan.

"There are people not even wearing masks. This is like a suicidal act," he said. "We want people to know this is a problem."

Asbestos fibers are so small that they easily enter the lungs, where they cause inflammation. Studies show they increase the risk of lung cancer, the rare cancer mesothelioma and lung disorders including asbestosis. Because the effects of asbestos are long-term, it often takes decades to see them.

The problem has been faced before by both Japan and the U.S. — two of the biggest asbestos consumers of the 20th century. As they struggled to address disasters, they found themselves spread too thin to address longer-term health hazards.

The U.S. Environmental Protection Agency was criticized for its monitoring of asbestos in the wake of Hurricane Katrina. Rescue crews working in the rubble of the World Trade Center after the Sept. 11 attacks also were at risk because the material was used in one of the fallen towers.

Japan faced similar issues after the 7.2 magnitude earthquake hit Kobe in 1995. As the government cleaned up 170,000 damaged buildings, it enacted no measures to limit the spread of dust or enforce the use of protective masks and did not immediately monitor asbestos, said Masahide Sakamoto, a Senshu University researcher who studied the government's clean-up after the quake.

The fire-resistant asbestos fibers were once seen as a miracle material used to strengthen cement, insulate buildings and fireproof ceiling and floor tiles. Consumption fell sharply after the mid-1970s as the link with lung cancer grew clearer. But in Japan, which relied on asbestos as it rebuilt from the ashes of World War II, public awareness of the risks lagged. Although spray-on asbestos was banned in 1975, a broader law preventing asbestos use didn't come until 2006.

Asbestos was not a major worry immediately after the March 11 tsunami, when the debris was wet and settled. But that rubble is now being hauled away, shaking loose the carcinogenic fibers in old wallboards and floor tiles.

The environment ministry has issued recommendations on the disposal of asbestos-containing building materials, but it's unclear if they're being enforced. It also conducted air monitoring in 15 locations in Fukushima, Ibaraki and Miyagi prefectures earlier this month, said Hisao Yamaguchi, an environment ministry official. The results will not be out until at least next month.

"We have experience from the past, so we do believe that this time, similar issues with asbestos will emerge," he said. "Public awareness of asbestos is also much higher now."

"At the Ministry of Environment, we want to act as quickly as possible," Yamaguchi said.

The health ministry said Wednesday it has issued pamphlets outlining safety guidelines and distributed 90,000 masks in the hardest-hit prefectures.

In the Miyagi prefecture town of Minami-Sanriku, Emperor Akihito and Empress Michiko visited a gymnasium where 200 evacuees live, offering encouragement to residents who lost homes and loved ones.

"I'm thankful he has come so far. It makes me so happy," said Mitsuko Oikawa, 73, who has been living at the shelter since the tsunami. Her house was washed away by the powerful waves, she said, shaking her head.

The asbestos risks in the tsunami wreckage are why Tokyo-based EFA Laboratories Co. decided to offer free asbestos testing and analysis to emergency workers and residents.

"If we can help them identify asbestos fibers and protect them to the greatest extent possible, I'm a happy guy," said Kevin Carroll, EFA's president.

During a tour around the Sendai area last week, EFA asbestos analyst Eric Eguina took debris samples from a half dozen locations to test at a mobile laboratory.

"I hope to find nothing, but I know it's there," said Eguina. Results given to The Associated Press confirmed asbestos fibers in a majority of the samples.

In one spot near a collapsed building that included asbestos, air testing showed an elevated density of 2 fibers per liter. The figure is lower than Japan's environmental safety standard of 10 fibers per liter, but that was before the cleanup work began shifting the rubble, which inevitably raises levels.

The owner of a nearby ironworks company that was washed away by the tsunami said he was surprised by the asbestos reading but wasn't too worried.

"We all die of something someday," Kisaburo Watanabe said. "I've been in manufacturing my entire life and have been around all sorts of toxins, including asbestos."