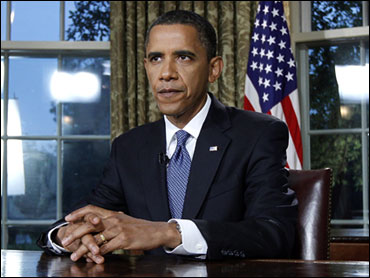 In November, George W. Bush will publish a memoir, Decision Points, in which he will try to put the tough moments of his presidency into perspective. His successor is already helping. On Sunday, President Obama spoke in New Orleans to commemorate the fifth anniversary of Hurricane Katrina. On Tuesday, he will speak to the nation about the final stage of the Iraq war. The back-to-back events could be called the Cleaning Up Bush's Messes Tour--what many Democrats would call the entire Obama presidency so far--and yet both events highlight Obama's struggles with disaster and war, potentially putting his predecessor in a more favorable light.

The bar starts low for Bush. The federal response to Katrina and Bush's decision to invade Iraq are signature fiascoes of his presidency, partly responsible for a political climate welcoming to an anti-Bush candidate like Obama. The simple passage of time also helps Bush's standing, as people forget their anger, encounter new things to worry about, or find themselves longing for traits they once despised after being deprived of them for 19 months.

As for Obama, he is not consciously trying to improve the public's view of the Bush years. Indeed, he is actively reminding people of the mess he inherited from his predecessor. It is a key theme of the entire Democratic campaign. At the same time, as Obama demonstrates the natural limits of presidential action, he unwittingly adds perspective to assessments of what President Bush could do. As he benefits from policies he once opposed--such as the surge in Iraq, which helped make tomorrow's speech possible--Obama proves that even a smart politician with the best of intentions can be wrong. And as he champions making tough calls even in the face of popular opposition, he often sounds eerily like his predecessor.

The relevant similarity between the federal response to Katrina and the BP oil spill (other than geography) is that both show the limits of the presidency and the federal government. Of course, a hurricane is different from an oil spill, and it's not necessary, for the purposes of comparison, to pass judgment on Bush's or Obama's response. The point is that from a purely logistical standpoint, it's hard to get the federal bureaucracy to move quickly. That's true whether you think the president is uniquely incompetent or a smart manager. A president weighing the benefits and costs of making a visit to the disaster area can catch similar grief for not taking command whether they're photographed in a plane or on a basketball court. And even an eloquent speaker can sound the wrong note.

On Tuesday night, President Obama will give a prime time address about Iraq as his predecessor did several times. He will announce the end of the American combat mission, a process started under Bush and which fulfills Obama's promise during the campaign to end the war. It has been more than seven years since Bush celebrated underneath a "Mission Accomplished" banner. The bad planning and hubris associated with the Bush administration's adventure in Iraq will fill volumes of brutal assessments. (They've already started.) The desperate situation Obama still faces in Afghanistan is the result of years of neglect and negligence caused by the Iraq war.

Yet Obama's announcement Tuesday would not be possible were it not for a strategy that he adamantly opposed. When Bush announced the surge in January 2007, then-Sen. Obama not only fought the increase in troops, he opposed on more than one occasion the underlying approach (already in practice in Iraq) that the new troops were being sent to pursue.

Sen. Obama not only expected the surge to fail; he saw it, incorrectly, as yet another example of Bush's inability to adapt to reality. President Obama, at least, does not face that criticism. He has based his strategy in Afghanistan on the same counterinsurgency strategy that was central to Bush's surge. He's done more than borrow his predecessor's strategy--he's also borrowing his language. Of these two quotes, which is Obama and which is Bush?

A) "If I didn't think that it was important for our national security to finish the job ... then I would pull them out today, because I have to sign letters to these families who have lost loved ones."

Yet if Bush's reputation benefits from his successor's response to some similar challenges, it may "have to deal," as he put it above, with a bigger blow in others. Once we get through the current economic mess, historians may find new reasons to blame Bush (and Clinton, for that matter). Similarly, history may not treat critics of Obama's stimulus kindly.

Perspective has a tendency to be apolitical. If a current president's challenges give him a new appreciation of the challenges faced by his predecessor, then a president's supporters should be open to the possibility that their guy isn't always right, and that the previous guy wasn't always wrong. (Just as opponents of the current president should consider the possibility that he isn't always wrong and his predecessor wasn't always right.) So when someone like Ben Quayle declares Obama "the worst president in history," the misreading of history and lack of context should cause us all to laugh at him--Bush supporters hardest among us.

The Fearless RINO Killers: How the conservative rebellion against the establishment is helping the GOP.
McCain's 2008 economic adviser dissents from the GOP knock on Obama.
On the Mall With Brother Glenn