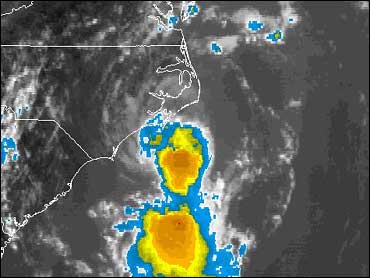 The storm was forecast to head away from the Southeast coast Monday, a prospect that pleased a fishing captain standing on a dock at Ocracoke, an island south of Cape Hatteras.

"Let's get it over with so we can go fishing," said Capt. David Nagel, who has operated the "Drum Stick" charter boat for 31 years. "Nobody's out. Everybody's tied up."

Nagel said he saw ominous clouds looming to the south and that the seas outside his harbor were 6 to 8 feet with winds blowing about 25 mph.

At 11 a.m., the center of Cristobal was about 15 miles east-southeast of Cape Lookout and about 70 miles southwest of Cape Hatteras, moving to the northeast near 7 mph, the National Hurricane Center said. That track was expected to continue for the next couple of days.

A tropical storm warning was in effect for north of Surf City to the Virginia-North Carolina border.

Maximum sustained winds were near 50 mph with higher gusts, with little change in strength expected.

Meteorologist Rich Bandy at the National Weather Service said the strong winds were on the eastern side of the storm, away from land.

"The only wind impacts are going to be on the immediate coast from Cape Lookout up to Oregon Inlet and that should be the worst of it," Bandy said of the northeast part of the state. The storm was expected to start pulling away from its coastline track about midnight after it passed Cape Hatteras, Bandy said.

Most visitors and residents along the coast are seeing "a typical summer day with scattered heavy thunderstorms. By tomorrow morning, this will be history," he said.

Rainfall was expected to be 1 to 2 inches with isolated amounts of 4 to 5 inches in areas where heavy rain bands passed overhead, he said.

Tony Spencer, chief of emergency management in Hyde County, which includes Ocracoke, urged beachgoers to stay out of the ocean because of the danger of rip currents.

Cristobal was expected to push tides 2 to 3 feet above normal. The National Weather Service said a few areas could see flooding from heavy rain.

Minor flooding was reported in Wilmington, N.C., on Saturday, and the area picked up 3.43 inches of rain, a record for the day.

Tropical Storm Dolly was speeding Sunday toward Mexico's Yucatan Peninsula and the resort of Cancun, packing sustained winds of 45 mph.

Dolly formed Sunday in the western Caribbean, and the U.S. National Hurricane Center issued a tropical storm warning for the Yucatan peninsula from the border with Belize to Campeche.

At midday, the center of the storm was about 270 miles east of Chetumal. It was moving northeast at 17 mph, on course to cross the Yucatan on Sunday night and move over the Gulf of Mexico on Monday morning.

As Tropical Storm Cristobal strengthened near North Carolina, Tropical Storm Bertha raced east toward Iceland after battering Bermuda last week, where it knocking out electricity to thousands at the Atlantic tourist destination.