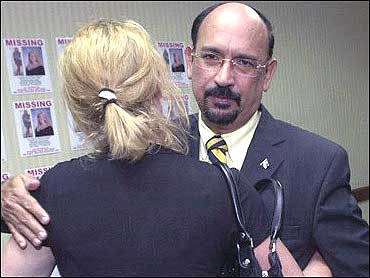 Aruba's prime minister went on television Thursday to express support for the family of a missing Alabama teenager, and police arrested three young men who acknowledged giving her a ride the night she disappeared.

Prime Minister Nelson Oduber said his government was working closely with U.S. authorities to solve the case of 18-year-old Natalee Holloway, who dropped from sight more than a week ago.

"Nobody is above the law," Oduber said. "We are confident ... that we will solve this case."

Those detained Thursday were two brothers from Suriname and a 17-year-old Dutch student.

The 17-year-old met Holloway at a casino in her hotel, the Holiday Inn, two nights before she disappeared on May 30, Aruban Police Cmdr. Jahn van der Straaten told a news conference.

In Mountain Brook, Ala., Holloway's hometown, teens who went to Aruba with her were quoted as saying the Dutch teenager was at several places the group visited, including the restaurant-bar where the honors student was last seen.

Marcia Twitty, Holloway's aunt, said the Alabama students recognized the Dutch teenager from photos shown them by FBI agents. "They had seen him around during the trip. He was just a local guy in the bar and the casino where all the kids were just kind of hanging out," she said.

Attorney General Caren Janssen said the three men were arrested about 6 a.m. but refused to name them or say on what grounds they were being held. Authorities previously described them as students

two Surinamese brothers and the son of a Dutch justice official studying to be a judge.

Police identified the Surinamese brothers only as Satish and Deepak K. The Dutch detainee, a student at Aruba International School, left his home in the middle-class Montana neighborhood of Oranjestad on Thursday with his head covered in a blue-and-green striped towel.

The three had been detained last week but were released after questioning. Authorities had described them as witnesses "or persons of interest."

Under the Dutch judicial system, which Aruba follows as a protectorate of the Netherlands, people can be arrested on suspicion of a crime but held for up to 116 days without being formally charged. Authorities did not say what charges the three may face and the men will not be identified until they are charged.

Holloway disappeared hours before she was to take a flight home. Police found her passport and packed bags in her hotel room. Extensive land and water searches have failed to turn up any trace of her.

Officials were investigating whether the three new detainees had any connection to two former hotel security guards who have been held in the case since Sunday, Janssen said.

The two ex-guards, Nick John, 30, and Abraham Jones, 28, will remain jailed, at least until a court hearing next week, Janssen said. Neither man has been formally charged.

"It's important that we find the truth," the attorney general said. "We're trying very hard to do our investigation in a professional way."

The Dutch detainee is white, while the two Surinamese men are of Indian origin. The two former security guards are black.

Janssen said the investigation "has nothing to do with color of skin" and social class.

CBS News Correspondent Kelly Cobiella reports that Cynthia Jones came to the courthouse on Wednesday hoping to see her son Abraham for the first time since his arrest. But the closed-door hearings for the suspects were held in their jail cells.

Jones' girlfriend Cynthia Degraph says investigators haven't talked to her about where Jones was the night Holloway disappeared, Cobiella reports.

"We were at the soul beach festival together," she said. "Me, Abraham and a friend Bernadine were all together."

A friend of Jones, 33-year-old Alvin Cornett, a black man, said it was a question of money.

"I've not had a problem with color," he said. "It's a question of rich guys and poor guys."

John and Jones are being investigated on suspicion of murder and capital kidnapping charges, their court-appointed defense lawyers, Noraina Pietersz and Chris Lejuez, have said.

John's lawyer, Noriana Pietersz, said she spoke to her client in jail Thursday.

"I have decided not to demand the immediate release of my client," she said. "We prefer to let the prosecution investigate, confident that my client will be released" by next Wednesday.

Holloway vanished while on a five-day trip with 124 classmates and seven chaperones celebrating their high school graduation.

The night she disappeared, Holloway ate and danced at Carlos' n Charlie's bar and restaurant.

Authorities have not said Holloway was a victim of foul play and have not ruled out any possibilities, including that she may have drowned.

The Aruba government and local tourism organizations have offered a $20,000 reward for information leading to Holloway's rescue, her family and benefactors in Alabama have offered an additional $30,000, and Carlos' n Charlie's donated $5,000.