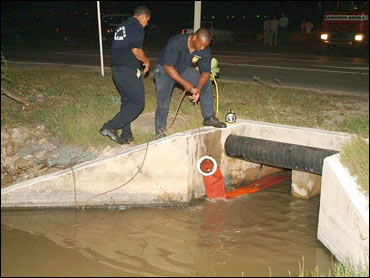 Natalee Holloway's stepfather says two new witnesses have come forward with information about the night nearly two months ago that the Alabama teenager disappeared on this Dutch Caribbean island.

According to George Twitty, one witness told investigators that he saw Joran van der Sloot, a 17-year-old Dutch youth who has been detained as the main suspect, driving to a nightclub across the road from the Marriott Hotel around 2:30 a.m. on May 30, when Holloway disappeared.

Firefighters searching for Holloway are now draining a pond - across the street from the Marriott Hotel - a process which is expected to take as long as 24 hours.

Authorities declined to say exactly what prompted them to want a closer look at the pond, which is in the area where van der Sloot has said he and Holloway were on the morning that she was last seen in public.

"It's part of the investigation, and we cannot comment at this moment," said police spokesman Edwin Comemencia.

Holloway, 18, vanished after an evening of eating, drinking and dancing at a nightclub that she left with the three, hours before she was to catch a flight home to Mountain Brook, Ala., at the end of a graduation trip with 124 classmates.

Holloway's family has increased the reward for information leading to the young woman's safe return to $1 million, from $200,000.

No one has been charged in the case, and van der Sloot is the only suspect still detained.

According to George Twitty, Holloway's stepfather, one new witness says van der Sloot tried to hide his face with his hands as he drove to the Racquet Club with two Surinamese brothers, Satish and Deepak Kalpoe. The brothers were detained as suspects and later released.

The stepfather said the account is significant because it places the three individuals near the hotel beach where van der Sloot says he left Holloway alone the last night she was seen in public.

"What's interesting is the time - 2:30 a.m. - when the three were supposedly on their way home," Twitty said, referring to their previous accounts to investigators.

The witness, a gardener whose name was not disclosed, gave his account to investigators Friday, according to Twitty.

The Kalpoe brothers first told police that they and van der Sloot dropped Holloway off at her hotel around 2 a.m. on May 30. Later, they said they had lied to protect their friend and that they had dropped him and Holloway at a beach near the hotel.

A second new witness told a private investigator hired by Holloway's family that she saw van der Sloot and the Kalpoe brothers drive into the Racquet Club three times that same night. The woman, who lives near the nightclub, has not yet spoken with investigators, he said.

Aruban authorities did not comment on the stepfather's statements.

Van der Sloot's lawyer said he had not received any information about it from authorities, and the attorneys for the Kalpoes were not immediately available for comment.