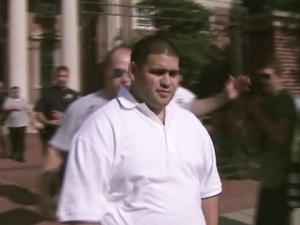 (CBS/AP) NEW YORK - Brooklyn police officer Arthur Roldan was released on $20,000 bail Thursday after pleading not guilty on charges that he raped his ex-girlfriend at gunpoint in a Staten Island parking lot, CBS New York reports.

The alleged attack happened Tuesday evening on Staten Island, where Roldan was off duty at the time. Roldan allegedly raped the woman at gunpoint and knifepoint and then punched her in the face, according to the criminal complaint. He was arraigned Thursday afternoon and pleaded not guilty to the charges. He was released on $20,000 bail.

A six-year veteran of the force, Roldan lives on Staten Island but is assigned to the 78th Precinct in Park Slope. He has been suspended without pay as the investigation continues.

The judge also warned Roldan not to have any contact with his accuser. If the order is violated, his bail will jump to $200,000.