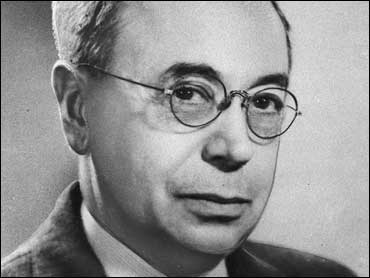 Arthur M. Schlesinger Jr., the Pulitzer Prize-winning historian and Kennedy insider who helped define mainstream liberalism during the Cold War has died at 89.

Schlesinger suffered a heart attack while dining out with family members Wednesday night in Manhattan, his son Stephen Schlesinger said. He was taken to New York Downtown Hospital, where he died.

"(He had) enormous stamina and a kind of energy and drive which most people don't have, and it kept him going, all the way through his final hours," Stephen Schlesinger said early Thursday morning, hours after his father's death. "He never stopped writing, he never stopped participating in public affairs, he never stopped having his views about politics and his love of this nation."

Schlesinger was among the most famous historians of his time, and was widely respected as learned and readable, with a panoramic vision of American culture and politics. He received a National Book Award for "Robert Kennedy and His Times" and both a National Book Award and a Pulitzer for "A Thousand Days," his memoir/chronicle of President John F. Kennedy's administration. He also won a Pulitzer, in 1946, for "The Age of Jackson," his landmark chronicle of Andrew Jackson's administration.

"He served his president, he served his country, and history will speak very well of him. We all should have history speak so well of us," Joe Cerrell, a Democratic political consultant who worked with Schlesinger in the Kennedy White House, told CBS Radio News' Charles White.

With his bow ties and horn-rimmed glasses, Schlesinger seemed the very image of a reserved, tweedy scholar. He was also an assured member of the so-called Eastern elite.

Cerrell described him as "bright. He was very well respected and not one of these pushy, aggressive types. A little more academic, which of course is what he was."

He was a longtime confidant of the Kennedys, a fellow Harvard man who served in President Kennedy's administration and was often accused of idealizing the family, especially not mentioning the president's extramarital affairs.

"At no point in my experience did his preoccupation with women — apart from (his daughter) Caroline crawling around the Oval Office — interfere with his conduct of the public business," Schlesinger later wrote.

Liberalism declined in his lifetime to the point where politicians feared using the word, but Schlesinger's opinions remained liberal, and influential, whether old ones on the "imperial presidency," or newer ones on the Iraq war. For historians and Democratic officials, he was a kind of professor emeritus, valued for his professional knowledge and for his personal past.

Schlesinger emerged as a historian with "The Age of Jackson." Published in 1945, when he was 27, the book offered a new, class-based interpretation of the Jackson administration, destroying the old myth that the country was once an egalitarian paradise. The book remained influential despite eventual criticism — even by Schlesinger — for overlooking Jackson's appeasement of slavery and his harsh treatment of Indians. Jackson served as president from 1829 to 1837.

Like many liberals of the 1940s, Schlesinger tried to reconcile support of the New Deal economic relief plan with the start of the Cold War. He responded by condemning both the far right and the far left, any system that denied the "perpetual tension" of a dynamic democracy. "World without conflict is the world of fantasy," he wrote in "The Age of Jackson."

In 1946, Schlesinger helped found Americans for Democratic Action, a leading organization of anti-communist liberals. Three years later, he published the influential "The Vital Center," which advocated a liberal domestic policy and anti-communist foreign policy. The book's title became a common political phrase, still in use decades later, and Schlesinger's call for defending American ideals abroad was endlessly revived as Democrats debated U.S. involvement in countries from Bosnia to Iraq.

In the 1950s, Schlesinger became increasingly involved in electoral politics, supporting Adlai Stevenson, the erudite Illinois governor and two-time loser to Dwight Eisenhower for the presidency. In 1960, the historian switched his loyalty to Kennedy, even as he acknowledged that Stevenson was a "much richer, more thoughtful, more creative person."

Liberals were wary of Kennedy, but Schlesinger, tired of Stevenson's dreamy detachment, was drawn to Kennedy's "cool, measured, intelligent concern." Over time, he came to embody Schlesinger's ideal for a head of state: charismatic but not dogmatic; progressive yet practical; a realist, he once observed, brilliantly disguised as a romantic.

Kennedy appointed the Schlesinger a special assistant, an unofficial "court philosopher" of symbolic, if not practical power.

"We would look to him both as a second-guesser, as an observer who could pull it all together, (and) without being nasty about it, show us the error of our ways if we made a bad recommendation," Cerrell said.

The high-minded historian was soon trapped in the tangle of superpower politics: the Bay of Pigs invasion in 1961, the disastrous attempt to overthrow Cuban leader Fidel Castro.

Schlesinger was opposed to the plan, he later wrote, but acknowledged helping the administration suppress a pre-invasion story by The New Republic that correctly reported the U.S. was training Cuban mercenaries. Had the press not cooperated, it might "have spared the country a disaster," a regretful Schlesinger recalled.

His time in government was brief. Kennedy was assassinated in 1963, and the historian soon left the administration of his successor, Lyndon Johnson. Schlesinger then supported Robert Kennedy's brief, tragic 1968 campaign.

Being a liberal, Schlesinger once observed, means regarding man as "neither brute nor angel." Whether discussing the Kennedys, Vietnam or the power of the presidency, Schlesinger sought moderation, the middle course. He blamed the Vietnam War on the moral extremism of the right and left and worried that the executive branch had become "imperial," calling for a "strong presidency within the Constitution."

In 1998, Schlesinger opposed Republican-led attempts to have President Clinton removed from office, and he later criticized President Bush for his doctrine of "preventive war," saying "I think the whole notion of America as the world's judge, jury and executioner is a tragically mistaken notion."

Schlesinger had six children — four from his first marriage, to the author Marian Cannon, and two from his second, to Alexandra Emmet.