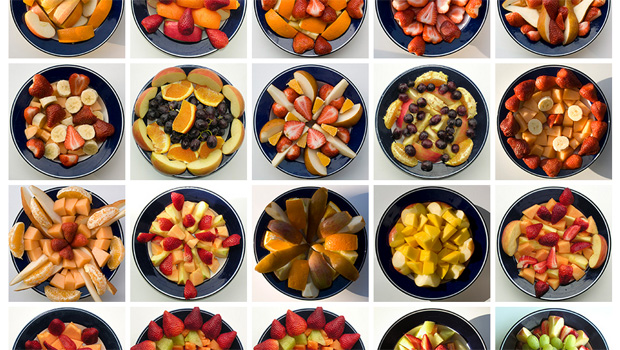 The fruit bowl has inspired many a still life over the years . . . but none quite on the scale of the one in the distinctively named town Martha Teichner has been to:

Moscow, Idaho, was named not for the city in Russia, but the one in Pennsylvania -- peculiar, right?

So it should come as no surprise that Moscow, Idaho, is also home to artist Roger Rowley, whose medium is fruit plates.

Teichner referred to one fruit plate as "an explosion."

"That's sort of what I was imagining," said Rowley, "to have this thing be overwhelming as a visual experience."

Like a giant kaleidoscope, or intricate stained glass windows.

Some are displayed by seasons -- a calendar of color. "They're arranged starting from the earliest one -- January is the upper left -- and they go down, through the columns, all the way to the end of December. From relatively warm yellows and oranges into the deep, rich blues and dark berries. So there is this rainbow, and immediately that sense of the seasons is apparent."

Up close, each one has an odd detail to reveal, or a story to tell, such as the photo with a strange black blob at the top.

Rowley explained: "My cat loves melon. It just happened to get right up there right when I had the camera ready. And so, 'Fine, Bebe, here you go,' snap!"

So, why fruit plates? Ten years ago, when this all began, the answer was simple: To convince his kids to eat fruit.

The rule he set for himself: nothing too fancy. "I wasn't trying to pick the perfect fruit," said Rowley. "I was trying to be true to what it is you buy in the store or at the farmers market."

But the Saturday market in Moscow, Idaho, is loaded with some of the most luscious fruit imaginable.

Teichner asked, "Do you ever look at the shapes and the colors of the things that are available in terms of, 'This is my paint and these are my pigments'?"

"Yeah," he replied. "I certainly am [thinking], 'Oh, the orange of an apricot would look amazing against the blue of a blueberry.'"

The market just happens to be next to the gallery where the fruit plates were being shown.

People do make the connection between what's outside and what's inside -- no accident since Roger Rowley is its director.

One woman reacted, "It's a true artist who can figure out how to make art out of their kids' breakfast plates!"

That is the question, after all: When does a plate of fruit stop being breakfast, and start being art?

"I'd put it on the breakfast table," said Rowley, "and it would get eaten or not eaten. And then, [I] began to just be more conscious about arranging it and going, 'Well, let's make this look nice. Maybe then the kids'll eat it more if they see this thing that looks aesthetically interesting.' It was maybe at least a year of me doing that before I ever took a photograph."


By then, Rowley could see the whole project in his mind -- hundreds of fruit plates, photographed in exactly the same way . . . at his back door.

He takes his pictures snapshot style, capturing shadows and reflections. The seasons, the weather, leave their signature on his work.

Teichner said, "You didn't go through any kind of agony of making art."

"Oh, no, no, it's very intuitive," he replied. "I mean, you start with the natural forms, whether it's an apple or a pear or an apricot, and so you have these natural building blocks."

Leaving one more question: When does a plate of fruit stop being art -- and start being breakfast?