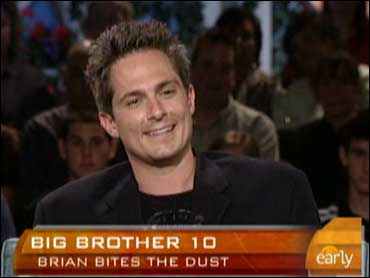 "Big Brother 10's" Brian Hart - the first evicted houseguest of the season - loved the thrill of the game and didn't bat and eyelash when it came to double crossing another teammate.

Although he considered himself "the player who got played," he told "Big Brother" host and The Early Show co-anchor Julie Chen that he had fun getting to the point where he was thrown out.

"I love this game, you know? The little bit that I watched, getting thrown out the way I did made me love it even more, he said. "This is perfect, you know?" "I just love how everything can turn on you. I love to play these kinds of games."

On Wednesday night, by a vote of nine to one, Hart was the first person voted off the show and evicted from the "Big Brother" house.

The CBS reality TV show pits 13 strangers against each other to live together inside a makeshift house/studio. The last houseguest standing takes home the $500,000 grand prize.

The 27-year-old, who exploited the trust of his teammates to use to his advantage and made other alliances, admitted that his arrogance may have led to his demise.

It turns out that Hart wasn't calling the shots after all.

"You know, I knew it was going to be a big risk, but it was always big risks equal big rewards or you end up drowning. So, I knew that it was going to work or it wasn't," Hart said. "So I'm not surprised by the play. I just, the timing was off. So if I had the timing a little bit different, I think that things would have ran a little smoother."

If given the chance to do it all over again and re-craft his game play, Hart would have taken things down a notch.

"My downfall was, I always knew I was gonna be arrogant in the game, that was what I wanted to play going into it," he admitted. "The key was, having people you could trust underneath you. But, you know, my downfall was playing it too fast, it was trying to do too much."

Hart had his plan of action in place from the very beginning.

He recalled the cast pleading not to stab each other in the back.

"And I'm thinking to myself, you're all getting screwed if I get the chance," Hart deviously said.

However in the end, "the player got played, he said. "And that's what I love about it."