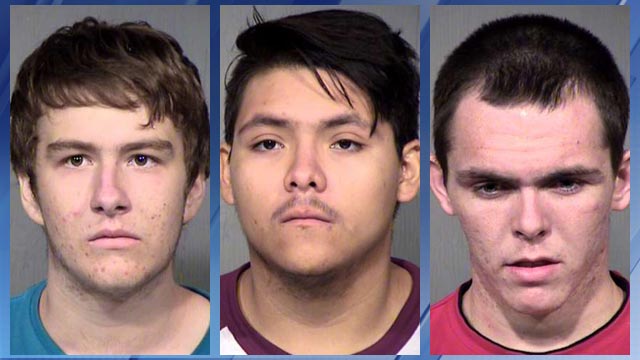 PHOENIX - Three teenagers have been arrested in a string of what authorities are calling "copycat" attacks tied to the freeway shootings that have plagued the Phoenix area in recent weeks.

Officials said the three arrested are all 18 years of age and are accused of using a slingshot and a rock to target pedestrians and vehicles over a period of four hours on Saturday evening.

Maricopa County Sheriff Joe Arpaio said the arrests were made after authorities received a phone call from a couple Saturday evening who reported that their rear driver's side window was shattered as they were driving. Arpaio said the victims were able to get the license plate number of a car the suspects were traveling in and relay that information to authorities.

Upon further investigation, sheriff's deputies found that another similar incident had occurred approximately 10-20 minutes earlier. The victim in that incident provided a vehicle and incident description identical to the subsequent event.

Authorities ultimately tracked the suspects' vehicle down and took the three tens into custody. They are suspected of committing 14 attacks on Saturday using a slingshot, officials said.

Arapio said the three are not believed to be at all connected to the 11 shootings which have taken place on Phoenix roadways in the past two weeks. He instead referred to the Saturday night incidents as "copycat" attacks.

Officials also noted that the three teens admitted to using the slingshot to propel granite rocks at approximately 10 pedestrians and four vehicles. All three face charges of assault, endangerment and criminal damage. Another 18-year-old male is being investigated for charges related to the incidents.

The 11 shootings over the past weeks have left the city of Phoenix on edge. Many drivers in the area have avoided freeways since the shootings began Aug. 29, mostly along I-10, a major route through the city. Eight of the cars were hit with bullets and three with projectiles that could have been BBs or pellets. One girl's ear was cut by glass as a bullet shattered her window.

The shooting scenarios have varied. Some involved bullets fired at random cars, others involved projectiles and one was apparently road rage.

Authorities have appealed for help through social media, news conferences, TV interviews and freeway message boards. Many of the thousands of tips proved to be false leads.

Longtime residents still remember a string of random shootings that terrorized Phoenix a decade ago. Nearly 30 people were shot then, and eight killed, including a cyclist who was riding down the street and a man who was sleeping at a bus stop. Two men were eventually caught and convicted.

A 19-year-old man from a Phoenix suburb was detained Friday at a convenience store near Interstate 10 is a person of interest in the shootings, but Arizona Department of Public Safety spokesman Bart Graves declined to say what led police to question him. The man has been booked into jail on an unrelated marijuana possession charge.

Graves said Friday that investigators were questioning the man "about a number of things" besides the freeway shootings, but he declined to disclose what that entailed.