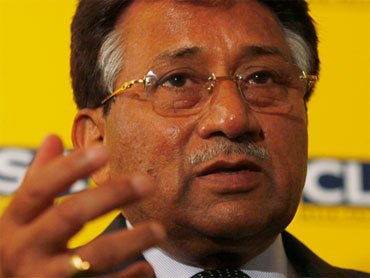 ISLAMABAD - An anti-terrorism court in Pakistan has issued a warrant for the arrest of the country's former president, General Pervez Musharraf in connection with the 2007 killing of the late Prime Minister Benazir Bhutto, in a move that potentially reopens a bitter chapter from the country's troubled political history.

Musharraf, a close ally of former U.S. President George W Bush, has lived in exile since 2008, dividing his time between the U.K. and Dubai, after he resigned to avoid a parliamentary impeachment by newly-elected politicians.

Bhutto, a westernized liberal politician, was killed in a 2007 gun and grenade attack, right after she emerged from a high profile political rally in Rawalpindi, the main suburb of Islamabad, ahead of the country's national elections.

Mohammad Ali Saif, a Pakistani barrister and a member of Musharraf's All Pakistan Muslim League (APML,) confirmed the arrest warrant to CBS News, and said that it appeared to be built on a political vendetta launched by President Asif Ali Zardari, Bhutto's husband, and Pakistan's prime minister Yusuf Raza Gilani.

"The case has no legal basis. It is just a political drama, a vendetta," Saif said.

A senior Pakistan government official said the warrant was issued on the basis of findings by the main federal police, known as the FIA or Federal Investigation Agency.

"The FIA found enough evidence to recommend General Musharraf's arrest so that he is presented in court" said the government official who spoke to CBS News on condition of anonymity.

An initial investigation right after Bhutto's killing noted the involvement of Baitullah Mehsud, a notorious Taliban militant, for having put together a conspiracy to carry out the attack.

"In the past, our leaders have been telling us, the killing of Benazir Bhutto was done by Baitullah Mehsud. Suddenly, where does President Musharraf fit in to the picture? This sounds quite questionable," Saif told CBS News.

Musharraf himself has repeatedly refuted claims that either he or the army or the intelligence services had any involvement in Bhutto's killing. But a report by a United Nations appointed commission of inquiry made public last year said the possibility of the involvement of Pakistan's military and security establishment could not be ruled out.

While the case surrounding Musharraf will have little immediate bearing on Pakistan's relations with the outside world, notably the U.S., western diplomats in Islamabad warned that any further acrimony surrounding the country's politics will be looked at with further concern by the Obama administration.

"Bitter political infighting in Pakistan will of course be of concern to the US, just at a time when the US is trying to establish closer relations with Pakistan" said one senior western diplomat who spoke to CBS News on condition of anonymity. "Every time the matter of President Musharraf becomes a high profile issue, there are some in Pakistan who remember the undemocratic character of his military regime and the backing he received from the U.S. Ultimately, this feeds in to anti-U.S. sentiment which is already strong in Pakistan."

Meanwhile, in a case related to anti-US sentiment in Pakistan, watched with interest from Washington, a second Pakistan government official on Saturday confirmed that Shah Mehmood Qureshi, the former foreign minister, dropped on Friday from a newly-appointed cabinet, left the government "amid irreconcilable differences on relations with the U.S."

Speaking to CBS News on condition of anonymity, the official revealed that differences between Qureshi and key leaders (notably Zardari and Gilani) widened when Qureshi refused to allow the foreign ministry to certify that Raymond Davis, a U.S. official arrested in Pakistan following his killing of two Pakistani men last month, was a serving US diplomat.

While U.S. officials have claimed that Davis was a serving diplomat and therefore armed with diplomatic immunity from prosecution, Pakistani officials refuse to accept the U.S. view. On Friday, a Pakistani judge in the city of Lahore ordered Davis to be sent to prison for two weeks to await a trial.