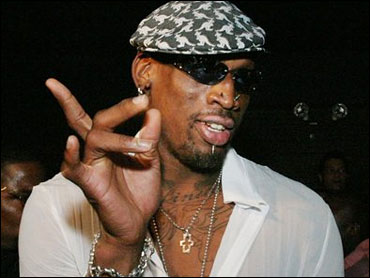 An arrest warrant has been issued for former NBA star Dennis Rodman, who's accused of failing to appear for arraignment on two Colorado traffic citations.

A court official say authorities will make no effort to seek out and arrest Rodman, but that he'll be picked up if he returns to Colorado.

Rodman was charged with speeding and reckless driving after a state trooper allegedly clocked him traveling 98 mph during a charity auto rally July 26th.

Rodman was pulled over and ticketed twice while driving his gold-and-black Lamborghini through Colorado in the race, according to the Colorado State Patrol. In between he was involved in a minor crash and later accused of stealing a hat in what he says is a "misunderstanding" at a gas station in Glenwood Springs.

A clerk told police that Rodman tried on a cowboy hat at the Glenwood Springs store, said he liked it, signed an autograph, then put $20 on the counter for gas.

"Unfortunately $40 worth of gas was put in the car, and there was the cost of the hat to consider," Glenwood Springs Police Chief Terry Wilson told the city's Post Independent newspaper.

Rodman said he went into the gas station to prepay for his gas, then signed several autographs. A woman employee gave him a hat, he pumped his gas and left.

"The lady gave it to me," he said, adding he has the gas receipt. "If they want me to pay for the hat, I'll give them double for it."

Wilson said Rodman ran up a total bill of about $67 at the station, including gasoline and the hat. He paid about $20, Wilson said. Rodman's agent, Darren Prince, said he and Rodman learned of the accusations through the media and had not been contacted by authorities.

Rodman's troubles began when he was ticketed for speeding and reckless driving near Frisco and given a court date to appear in Summit County, Colorado State Patrol Capt. Ron Prater said. A trooper allegedly clocked Rodman going 98 mph on Interstate 70, in an area where the speed limit is 65 mph, Prater said.

Later in the day, Rodman received a second ticket in western Colorado for driving 89 mph, Prater said. He did not know the speed limit in that area or the exact location where Rodman was pulled over.

Prince said Rodman also was in a minor crash when a Ford Mustang with people taking photographs and video of Rodman for his sponsor apparently lost control and hit the bumper and the driver's side of Rodman's car. No one was hurt.