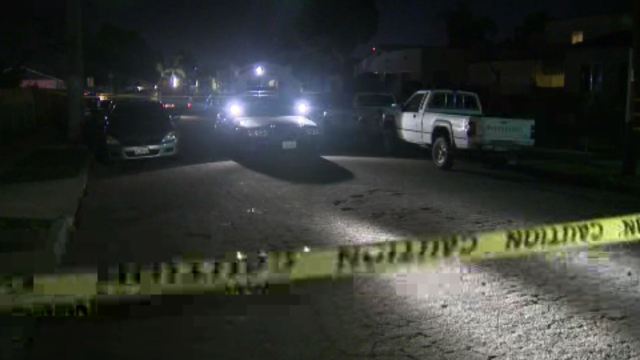 LOS ANGELES -- A suspected gunman was arrested on suspicion of killing a 1-year-old girl who was shot in the face as she slept in a crib in her Compton home, authorities said Tuesday.

Ray Howard Patterson, 23, was taken into custody on Monday and remained jailed without bail, according to a Los Angeles County Sheriff's Department website.

Autumn Johnson was shot in the head the evening of Feb. 9. The gunman got out of a Chevrolet Impala and fired at least five shots at a converted garage where the child lived with her parents, authorities said.

Investigators were looking for the car's driver. Los Angeles County, the city of Compton and the FBI have offered $75,000 in rewards for information leading to the capture and conviction of the killers.

Investigators said they believe the gunman was targeting the baby's 24-year-old father, who is an acknowledged gang member.

Neighbor Miguel Contreras said he, his wife and their three children threw themselves to the ground when they heard gunshots. Contreras heard screaming and went outside to find the girl's father cradling her.

"The baby was full of blood, and its head was dangling from his arms," Contreras told the Los Angeles Times . "He kept saying, 'My baby, my baby.' Everyone started calling the police. It seemed like the whole world was calling 911."

Sheriff's deputies arrived to find the father on the sidewalk, holding his daughter. She died at a hospital.

The southern Los Angeles suburb where the girl lived has been plagued by violence, including eight homicides in the past six months.

Hundreds of people attended an anti-violence march in the girl's honor on Sunday, the day after her funeral.