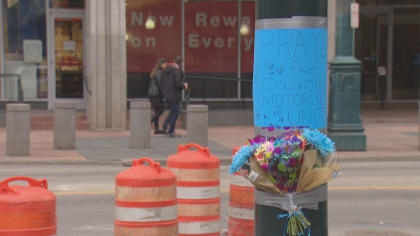 DENVER -- Police say a suspect in the shooting of a transit security officer in downtown Denver is in custody.

The Regional Transportation District says the contract officer, who worked for the security company Allied Universal, was shot late Tuesday night and died on the way to the hospital. The district didn’t identify the officer, but RTD’s police chief, John Tarbert, said he leaves behind two children.

“We are investigating whether the loss of life had anything to do with his uniform,” Denver Police Chief Robert White said during a press conference Wednesday.

The incident happened on a plaza near Union Station, a hub for local buses and trains as well as Amtrak. Two women told police they were talking to the guard and asking about light rail routes when they saw a man approach the guard from behind and point a gun to his neck and then shoot him, White said.

Witnesses say they heard the suspect say something along the lines of, “Do as I tell you to,” before the shot went off, White said. A suspect who White identified as Joshua Cummings, 37, was found hiding about 20 minutes later and was taken into custody. White said Cummings had a home in the area and had no previous contact with police.

White reminded officers to be vigilant in the wake of the shooting.

Police recovered a gun that may be involved in the shooting, reports CBS Denver. Officials don’t believe anyone else was involved.

“This is an incredibly sad day for us, and on behalf of the entire RTD family I extend my prayers and express my sincere condolences to the officer’s family, friends and loved ones,” said RTD General Manager and CEO Dave Genova in a statement released to the station.

A group of motorcycle officers taped a blue sign along with flowers on a pole at the scene offering their prayers as people walked by on their way to work in the morning.