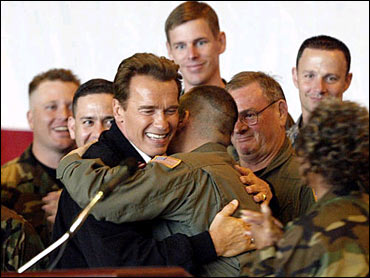 Schwarzenegger told reporters he "talked about the situation in the Middle East" during a private visit with Abdullah at Jordan's royal palace. The celebrity governor arranged the stop after criticism from some Arab-Americans that his trip to Israel didn't include meetings with Palestinian groups.

Schwarzenegger said Monday he supports the creation of a Palestinian state and that Palestinians "were not forgotten" on his trip. But he noted that "we got no invitation" to meet with any Arab group. "We are ready to meet anybody, any group, at any time," the governor said.

He spoke with Hamill for about five minutes in a room at the U.S. military's Landstuhl Regional Medical Center, and said the 43-year-old civilian contractor appeared to be in good health.

"I just tried to let him know we support him and good luck," Schwarzenegger said. "It must be unbelievable to be under the threat of maybe dying," he said, referring to Hamill's three weeks in captivity in Iraq. Hamill escaped his kidnappers over the weekend and was being treated at the base for a gunshot wound.

The movie star-turned-politician said it was a coincidence that the two were at the hospital at the same time, and that Hamill requested the visit after learning from military officials that Schwarzenegger was there.

He also cheered up hundreds of troops on the base with a speech in which he shared humorous tales of his experiences in the Austrian military, bodybuilding and politics.

"I play the Terminator, I play the commando," he said to loud applause. "You are the true action heroes."

Airman 1st Class Jonathan Ivy of Lovejoy, Ga., said Schwarzenegger was "the first celebrity here since I've been here. It lifts morale. I love his movies."

"He's one of my role models. He's doing a great job in California. ... He's real people, he's not like other politicians making money," said Caballero, holding a magazine photo of Schwarzenegger he hoped to get autographed.

The governor - on his first trip overseas as an elected official - appeared on a stage in a hangar with dozens of airmen before a huge American flag. Portions of his remarks were broadcast live in parts of California and on national U.S. news networks.

"I have to say that my career in the military was not spotless," Schwarzenegger told the crowd. "There was one night when I woke up in the morning and my tank was gone. I forgot to put the right gear in there and it rolled into the river in front of us. That's where I found it the next morning."

The governor followed his speech with the more somber task of visiting wounded soldiers at the base hospital. He flew out Monday evening, Ramstein spokesman Maj. Mike Young said.

Schwarzenegger had earlier been in Tel Aviv and Jerusalem, where he paid tribute to the millions of Jews killed in the Holocaust and helped dedicate a planned museum of tolerance.

In Jordan, Schwarzenegger had lunch with Abdullah and gave the king a large sculpture of a seashell carved out of redwood. On the menu was pan-fried salmon, beef, Cajun chicken and spaghetti. The king is a personal friend of the governor and had previously visited Schwarzenegger's Los Angeles home.