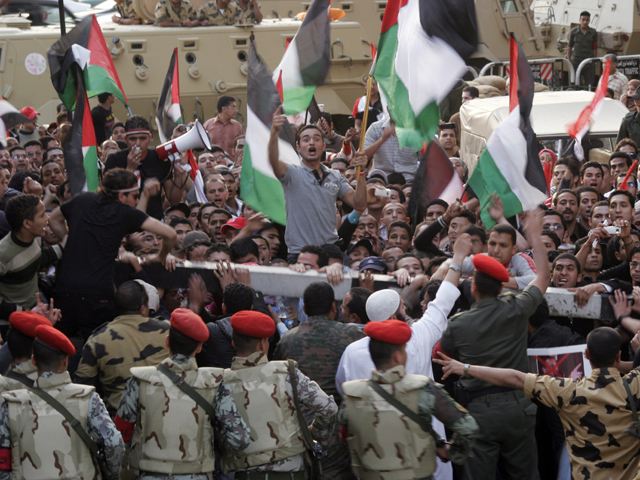 CAIRO - Soldiers beat hundreds of protesters with clubs and fired heavy volleys of gunfire into the air in a pre-dawn attack that broke up a demonstration in Cairo's central Tahrir Square, a sign of the increasing tensions between Egypt's ruling military and the country's protest movement.

A force of around 300 soldiers swept into the square around 3 a.m. and waded into a tent camp in the center where protesters had formed a human cordon to protect several army officers who joined their demonstration, witnesses said.

The troops dragged an unknown number of protesters away, throwing them into police trucks.

"I saw women being slapped in the face, women being kicked," cried one female protester, who among around 200 who fled to take refuge in a nearby mosque. Troops surrounded the mosque and heavy gunfire was heard for hours. Protesters in the mosque reported large numbers of injured, including several wounded by gunfire.

The assault came hours after tens of thousands massed in Tahrir Square on Friday in one of the biggest protests in weeks, demanding that the military prosecute ousted president Hosni Mubarak and his family for alleged corruption.

The rally was a show of the increasing impatience and mistrust that many Egyptians feel toward the military, which was handed power when Mubarak was forced out of office on Feb. 11. Some protesters accuse the military leadership of protecting Mubarak — a former military man himself — and more broadly, many are unclear on the army's intentions in the country's transition.

More than in previous protests, chants and banners Friday directly criticized the military's Supreme Council, headed by Defense Minister Field Marshal Hussein Tantawi, a former Mubarak loyalist. At one point, a group of protesters walked behind a contingent of military police in Tahrir, shouting, "The people want the fall of the field marshal," and haranguing the soldiers until they left the square.

A number of army officers in uniform joined the protesters, some of them accusing the Supreme Council of corruption in speeches to the crowd. After dark, hundreds of protesters remained in the square, intending to camp out with the officers. Before the main assault, military police tried several times to move in and detain the officers but were pushed by protesters. At one point, protesters pushed and shoved an army general, tearing his cap from his head.

After the pre-dawn attack, the scene was chaotic. Inside the mosque, families who had camped out in the protest tent searched for children who got lost in the mayhem. Outside, protesters scuffled with soldiers on sidestreets, chanting, "Marshal, tell your soldiers, we aren't leaving."

Outside the Egyptian Museum, near the square, protesters trying to flee the sound of gunfire were blocked by soldiers, who hit them and knocked them to the ground before dragging them away.

"I saw them detain a bunch at the Musuem. They were beating some pretty badly," said one protester, Loai Nagati.

Thursday morning, the Supreme Council issued a statement blaming the unrest on "thugs" loyal to the former ruling party. It said it had ordered the arrest of Ibrahim Kamel, a former ruling party figure close to Mubarak's son Gamal, accusing him and his aides of stirring up trouble in the square, "scaring people and carrying out thuggery."

The confrontation was a sharp contrast to the warmth protesters felt toward the military during the 18-day wave of mass demonstrations that led to Mubarak's ouster and in the days immediately following. Many praised the military for refusing to fire on protesters, and welcomed the Supreme Council's stepping in to rule.

But tensions have grown since. Reports have emerged of some protesters arrested and tortured by the military in past weeks. Anger has also grown over the failure so far to prosecute Mubarak and his family.

Corruption was widespread under Mubarak's 29-year-rule, and resentment particularly accelerated in the last years of his rule, as his son Gamal — an investment banker-turned-politician — rose to prominence and brought into power a group of millionaire tycoons who implemented a program of economic liberalization. Several of those businessmen-politicians are now on trial or under investigation for allegedly using their positions to amass personal fortunes.

But Egyptians insist the corruption goes right to the top.

Trying to assuage the public anger, the military appeared to be trying to accelerate prosecutions. Authorities announced Thursday that Mubarak's former chief of staff, Zakariya Azmi, had been detained for questioning on corruption allegations, the highest-ranking member of his regime to be arrested so far.

The army denies it is protecting the ousted president — a former military man himself.

But so far, there has been no move against Mubarak or Gamal, who was widely seen as his choice as successor. Since his ouster, Mubarak and his family have been under house arrest at a presidential palace in the Red Sea resort of Sharm el-Sheikh, their assets frozen.

During Friday's Tahrir rally, protesters set up a cage with the pictures of Mubarak, his family and top aides inside. An activist read out charges against them, and the crowd responded, "We testify that Mubarak, his family and their cronies have corrupted Egypt, politically, economically, impoverished the people and committed crimes of torture and killings."

"He lives in a palace and our poor still in the shanty towns," one protester chanted in a microphone at the square. "We are not leaving here until Mubarak is on trial," another speaker vowed.

One protester in the crowd, 51-year-old Ahmed Dessouqi, accused the military council of going after the small fish rather than the bosses.

"The council is incapable of going against Mubarak. They started with the tail without touching the head. Can that work?" he said. "Mubarak was the one who appointed the members of this council, and this is why they delay his prosecution."

In a further challenge to the military, more than 1,000 protesters in the evening marched on the Israeli Embassy in Cairo, denouncing Israeli airstrikes against the Gaza Strip earlier in the day.

The demonstrators, including a large contingent of Muslim Brotherhood members, were stopped by a military checkpoint yards (meters) away from the residential building where the embassy is located, overlooking the Nile River. They chanted demands that the embassy be shut down and that Egypt stop selling natural gas to Israel.

The march was an unusual test of the military, which has promised Egyptians greater freedom of expression but at the same time have sought to reassure Israel and its ally the United States that the fall of Mubarak would not mean an anti-Israeli turn in Egypt's foreign policy.

In the past, Mubarak's security forces strictly prevented any protests from getting anywhere close to the embassy, located in a residential building overlooking a bridge over the Nile. Soldiers Friday allowed the demonstration to get nearer than others in the past. At the same time, officers at the checkpoint tried to convince the crowd to disperse.

"Enough, we have your demands!" one officer told the protesters.