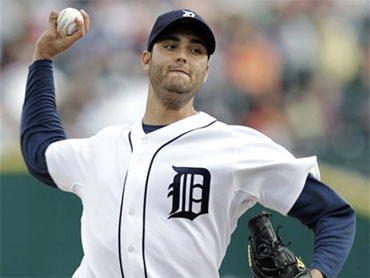 With two outs in the ninth inning, Umpire Jim Joyce called Cleveland's Jason Donald safe at first base on a ground ball. Replays clearly showed that Donald was out and that Galarraga thus should have had a perfect game - an extremely rare achievement resulting from not allowing any of a team's opposing batters to reach base.

A distraught Joyce later apologized for the call.

With tongue in cheek, Gibbs said he was speaking with the "full weight of the federal government" in making his appeal for the perfect game.

In any case, he said the umpire's admission of a mistake and the pitcher's calm response was a "tremendously heartening" show of sportsmanship that is a good lesson for baseball and for Washington.

Gibbs said he had not discussed the baseball episode with the president.

In making the comments, Gibbs noted that his 6-year old son Ethan is a baseball player. Gibbs lamented that he missed his son's game yesterday.

During Gibbs' press briefing, news came out that Major League Baseball league would not reserve the call, according to Associated Press and CBS News sources. However, commissioner Bud Selig did say that the league will review video replay procedures.