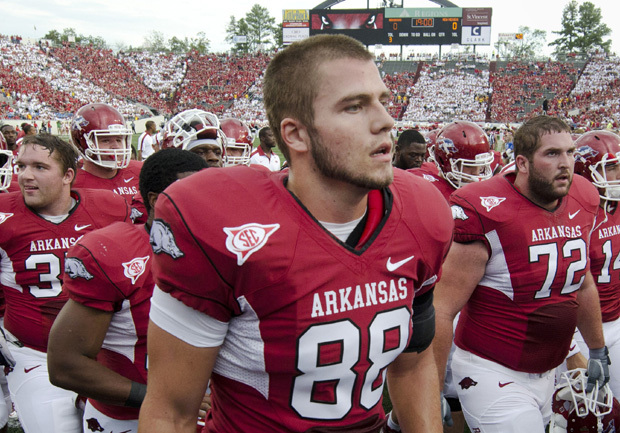 The university said Uekman was pronounced dead at Washington Regional Medical Center in Fayetteville on Sunday.

The cause of death wasn't immediately known, but the university said Uekman was found unconscious and unresponsive in his dorm room on campus at approximately 11:15 a.m. Sunday. He was last seen playing video games by a roommate approximately an hour earlier.

When emergency services personnel arrived, Uekman was in cardiac arrest and was pronounced dead at 12:10 p.m.

"Garrett Uekman was a special member of our family, and we are all saddened by his passing," Arkansas coach Bobby Petrino said in a statement. "His loss is a terrible shock, and it makes you realize how precious life is."

University police Lt. Mat Mills said there were no suspicious circumstances about Uekman's death, and his body will be sent to the state medical examiner for an autopsy.

Petrino spoke briefly Sunday night, fighting back tears as he read from a statement. He noted that Uekman's final game, Arkansas' 44-17 victory over Mississippi State on Saturday, was in Little Rock's War Memorial Stadium — where he played his high school games while at Little Rock Catholic.

Arkansas athletic director Jeff Long also spoke and said the university wasn't aware of any pre-existing medical condition with Uekman. He said the Razorbacks' players showed "shock and dismay" when told of Uekman's death at an afternoon team meeting.

Long also said the school would hold a candlelight vigil Monday night in honor of Uekman and said his family had expressed the desire for the No. 3 Razorbacks to play Friday's game at No. 1 LSU as scheduled.

"Certainly the feelings of Garrett's family (are) that football and the University of Arkansas and the Razorbacks were very important to him," Long said. "And that he would want us to continue to complete."

The 19-year-old Uekman redshirted last season for the Razorbacks and played in nine games this season. He was majoring in applied exercise science.

Uekman's parents, Danny and Michelle, released a statement through the university.

"Our son was living his dream of going to the U of A and playing football for the Razorbacks," the statement read. "He loved his school, his coaches, and his teammates and classmates, and was an influence and inspiration to so many people. We ask for your love and prayers for Garrett, our family and his friends as we all cope with this heavy and painful loss."

David Estes, the football coach at Little Rock Catholic where Uekman played in high school, said he was told by Arkansas running backs coach Tim Horton that Uekman had been found by his roommate in his dorm room on campus. Estes said he watched Uekman play and was "beaming from ear to ear" Saturday night in War Memorial Stadium as the Razorbacks beat Mississippi State.

"Garrett was any parent or coach's dream," Estes said. "He was one of those special kids and had a passion for everything. He loved Catholic High, loves UA and wanted to be a Razorback forever.

"He got to live that dream."