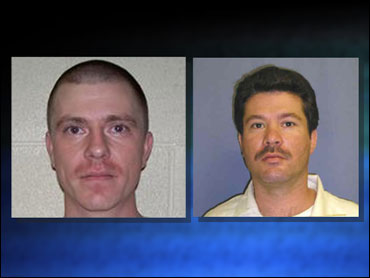 A pair of convicted murderers who escaped from an Arkansas prison wearing guard uniforms made at the facility were captured Tuesday afternoon after being stopped for speeding in New York state.

A prisons spokeswoman said the two were in the same car that had been left for them at the Cummins Unit prison about 90 miles southeast of Little Rock last Friday night. Spokeswoman Dina Tyler said a New York state trooper tried to stop the men for speeding. Both were caught after the car crashed and the two tried to run away. No one was hurt.

Calvin Adams and Jeffrey Grinder were captured near Hornell, N.Y., about 90 miles southeast of Buffalo.

Arkansas State Police Spokesman Bill Sadler said Tuesday that police arrested Deana Davison and Ryan McKinney, both of Little Rock, and Michael Stephenson of Jacksonville. The three were charged with furnishing an implement for escape, a felony.

Sadler would not say if police believe others may have helped the killers escape.