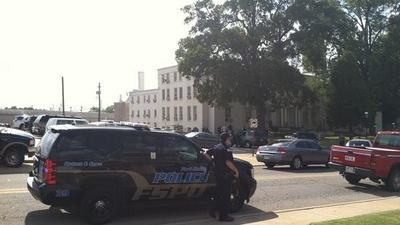 The shooting suspect is in custody, according to Lt. Brent Grill. He says the suspect was armed with more than one weapon, including two handguns, an assault rifle and several magazines. The suspect was also wearing a "webbing" vest.

"He had more than one weapon, several shots fired, some gear on that appeared to be tactical. I did not see any body armor, it's obvious that he came here with the intent to do some killing," Grill says, according to KFSM.

The victim sustained a non-life threatening gunshot wound to the leg after the suspect opened fire on the second floor of the courthouse, according to police.

Grill says both the shooter and the victim were taken to a local hospital, KFSM reported.

A Van Buren police officer sustained minor scrapes and cuts when the suspect fired shots at his patrol car, Grill says. He was treated and released.

Streets in a two block radius surrounding the courthouse were shut down.

Neither the identity of the alleged shooter or a motive behind the incident has been released.

An eyewitness tells KFSM dozens of gunshots were heard. Circuit Clerk Sharon Blount says she and her employees heard the gunshots on the second floor and quickly locked the door to their office. The employees in the circuit clerk office hid in the office vault.

All huddled together, Blount says she tried to keep them quiet so that they could hear what was happening and not draw attention to themselves.

Blount says they heard a banging on their office door and a woman screaming "they shot my mom, let me in!" They let the woman into the office and kept her in the vault with them until officers cleared the scene.

The courthouse will be closed Wednesday.