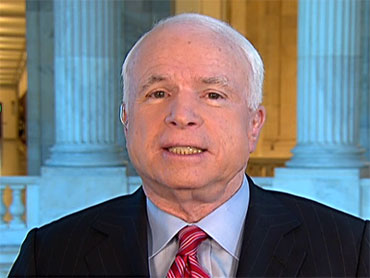 The debate over Arizona's new illegal immigrant law will likely move from protest lines and talk shows to the courtroom, where a judge could be asked to decide whether the state can enforce laws that until now had been the federal government's exclusive domain.

Republican Gov. Jan Brewer, who signed the bill on Friday, said Arizona must act because Washington has failed to stop the flow of illegal immigrants and drugs from Mexico.

"This law is a response to the president's and the administration's failure to secure our borders," McCain told CBS' "The Early Show". "The federal government has a responsibility to secure the borders, they have not."

Opposition to the law grew Monday as opponents used refried beans to smear swastikas on the state Capitol, civil rights leaders and others demanded a boycott of the state, a petition drive began to put the measure to a public vote and the Obama administration weighed a possible legal challenge.

Activists are planning a challenge of their own, hoping to block the law from taking effect by arguing that it encroaches on the federal government's authority to regulate immigration and violates people's constitutional rights by giving police too much power.

The measure - set to take effect in late July or early August - would make it a crime under state law to be in the U.S. illegally. It directs state and local police to question people about their immigration status if there is reason to suspect they are illegal.

"If you look or sound foreign, you are going to be subjected to never-ending requests for police to confirm your identity and to confirm your citizenship," said Alessandra Soler Meetze, executive director of the American Civil Liberties Union of Arizona, which is exploring legal action.

Employees at the Capitol came to work Monday to find that vandals had smeared swastikas on the windows. And protesters gathered for an eighth straight day to speak out against a law they say will lead to rampant racial profiling of anyone who looks Hispanic.

"I do not want any discriminatory behavior," McCain told CBS News, saying he had spoken to senior law enforcement officers who told him "they think they can implement this law without racial profiling."

Junior Perez, 19, has heard the assurances that the law is aimed only at illegal immigrants. He's not convinced.

He is a citizen, born in Arizona. His parents are legal immigrants from Mexico and are citizens, too. In a state where more than 30 percent of the population is Hispanic, many feel the sting of racism in the new law.

"They're just focusing on us because we're brown, and it's devastating," said Perez.

Jon Garrido, who produces a Hispanic website and ran unsuccessfully last year for Phoenix City Council, told The Arizona Republic Monday he pulled organizing papers for a petition drive to repeal the law. A referendum would require the signature of 76,682 registered voters to get on the November ballot. If successful, the effort would block the law from taking effect until the vote.

President Obama, who warned last week that the measure could lead to police abuses, asked the Justice Department to complete a review of the law's implications before deciding how to proceed.

A San Francisco lawmaker who came to the United States as an undocumented teenager plans to introduce legislation Tuesday calling for a citywide economic boycott of Arizona to protest the state's strict new immigration law.

"We are not going to use our city resources to support that law," said Supervisor David Campos, who is himself an immigrant from Guatemala and became a U.S. citizen in 1997.

Currently, many U.S. police departments do not ask about people's immigration status unless they have run afoul of the law in some other way. Many departments say stopping and questioning people will only discourage immigrants from cooperating to solve crimes.

Under the new Arizona law, immigrants unable to produce documents showing they are allowed to be in the U.S. could be arrested, jailed for up to six months and fined $2,500. That is a significant escalation of the typical federal punishment for being here illegally - deportation.

People arrested by Arizona police would be turned over to federal immigration officers. Opponents said the federal government could thwart the law by refusing to accept them.

Supporters of the law said it is necessary to protect Arizonans. The state is home to an estimated 460,000 illegal immigrants and is the nation's busiest gateway for people slipping into the country. Brewer has ordered state officials to develop a training course for officers to learn what constitutes reasonable suspicion that someone is in the U.S. illegally.

The crux of opponents' arguments is that only the federal government has the authority to regulate immigration.

"If every state had its own laws, we wouldn't be one country; we'd be 50 different countries," said Thomas Saenz, president and general counsel of the Mexican American Legal Defense and Educational Fund.

Kevin Johnson, dean of the law school at the University of California-Davis and an immigration law professor, said such a lawsuit would have a very good chance of success. He said the state law gets into legal trouble by giving local law enforcement officers the authority to enforce immigration laws.

However, Gerald Neuman, a Harvard Law School professor, said Arizona could make a compelling legal argument that it has overlapping authority to protect its residents.

Kris Kobach, a University of Missouri-Kansas City law professor who helped write the Arizona legislation, said he anticipated legal challenges and carefully drafted the language. He said the state law is only prohibiting conduct already illegal under federal law.

San Francisco's city attorney has urged policymakers in the city to stop dealing with Arizona and Arizona businesses. Leaders in Mexico also demanded a boycott, as did civil rights leader Al Sharpton.

During a town hall meeting Monday in Tucson, Brewer dismissed the threat of a boycott, saying she doesn't believe the law is "going to have the kind of economic impact that some people think it might," the Arizona Daily Star reported.

The law has strong public support in Arizona, where passions have been running high since a rancher was killed close to the Mexican border last month, apparently by drug smugglers from across the border.