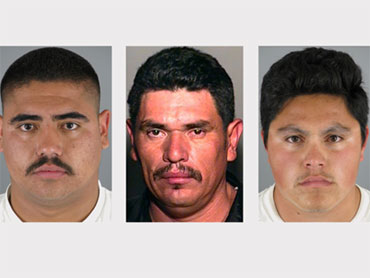 CHANDLER, Ariz. - A man who stole drugs from a Mexican cartel was bludgeoned, stabbed and then decapitated in a suburban Phoenix apartment — a gruesome killing that police say was meant to send a message that anyone who betrays the traffickers will get the same treatment.

The horrific display of drug violence spilling over the border is believed to be the only beheading by a Mexican cartel in the United States.

The body of Martin Alejandro Cota-Monroy, 38, was found lying in a pool of blood Oct. 10 in a Chandler apartment, his severed head a couple of feet away.

Chandler police have said from the beginning that they strongly suspected it was the work of a Mexican drug cartel, but it wasn't clear exactly why until a police report was released Wednesday.

The report, citing Border Patrol intelligence, said that Cota-Monroy stole 400 pounds of marijuana and some meth from the PEI-Estatales/El Chapo drug trafficking organization. Cota-Monroy told the cartel that the Border Patrol had seized the drugs, but the cartel learned the truth and hired men to kidnap and kill him in Nogales, Mexico.

But Cota-Monroy was able to talk his way out of being killed, saying he'd pay back the money and use his house for collateral, the report says.

It turned out that the house wasn't Cota-Monroy's, and he fled to the Phoenix area, leading the cartel to hire assassins to go to Arizona, befriend Cota-Monroy and kill him.

Police believe there was a reason that it was carried out in such a violent manner.

"This is a message being sent: Not only are they going to kill you but they're going to dismember your body. And, `if you cross us, this is what happens,"' Chandler police Detective David Ramer said Wednesday.

One man, Crisantos Moroyoqui, has been charged in the killing, and three others are believed to have fled to Mexico.

The other suspects were identified as Jose David Castro Reyes, 25; Isai Aguilar Morales, 22, and a man between the ages of 20 and 27 known only by the nickname "El Joto," a derogatory Spanish term for a gay man.

The police report said a rival drug cartel, the Beltran-Leyva organization, was possibly planning on killing the three men. Cota-Monroy was reporetdly a mid-level member of that drug cartel, for which his brother also worked.

The U.S. has seen extensive cross-border violence tied to drug trafficking. In one example from 2009, members of a group of Mexican drug traffickers were indicted in the murders of nine people in the San Diego area — including two victims whose bodies were dissolved in acid.

But Tony Payan, a political science professor at the University of Texas at El Paso who has done extensive research on border violence, has said the Arizona case could be the only known beheading in the U.S. carried out by a drug cartel.

Decapitations are a regular part of the drug war in Mexico as cartels fight over territory. Headless bodies have been dangled from bridges by their feet; severed heads have been sent to victims' family members and government officials; and bags of up to 12 heads have been dropped off in high-profile locations.

More than 34,000 people have been killed in Mexico in drug-related violence since December 2006, when President Felipe Calderon deployed soldiers to battle the cartels in their strongholds.

Moroyoqui, a day laborer who had been living in the apartment complex where the killing occurred, is charged with second-degree murder. Ramer said he likely was in the room when Cota-Monroy was killed but didn't participate in the killing.