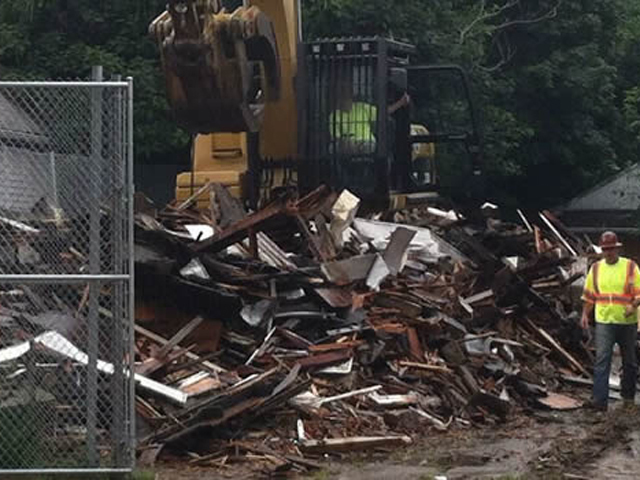 (AP) CLEVELAND - With several swipes from the arm of an excavator and a smattering of applause from spectators, demolition began Wednesday morning on the Cleveland house where three women were held captive and raped over a decade.

The house is being torn down as part of a deal that spared Ariel Castro a possible death sentence. He was sentenced last week to life in prison plus 1,000 years.

But the question remains: How could the crimes go unnoticed so long in Castro's blue-collar neighborhood?

One of the women imprisoned there, Michelle Knight, showed up early Wednesday before the work began. She made a brief statement and released balloons into the air.

Katie Mae Brown, 62, a former resident of the street, said tearing the house down was important for the neighborhood to show "that monster - that he is behind bars and that he's never going to get out."

Cuyahoga County prosecutor Tim McGinty said the two houses to the left of Castro's are also being torn down and will be developed into a park or whatever the residents decide.

Prosecutors say Castro cried when he signed over the house deed and mentioned his "many happy memories" there with the women. They highlighted the teary-eyed scene to illustrate Castro's "distorted and twisted" personality.

On Wednesday, McGinty called him "one evil guy."

Family members, including his son, Anthony Castro, went to the house Monday and picked up personal items including old photographs, guitars and bicycles.

Relatives said the house razing was part of the healing process for them. "It's sad and hard but it is necessary for us to move on," Anthony Castro told WKYC-TV.

They escaped May 6, when Amanda Berry, now 27, broke part of a door and yelled to neighbors for help. Castro was arrested that evening.

At Castro's sentencing, prosecutors displayed photos that provided a first glimpse inside the rooms where the women lived.

Stuffed animals lined the bed and crayon drawings were taped to the wall where Berry lived with her young daughter, who was fathered by Castro. One of the drawings on a shelf said, "Happy Birthday."

The window was boarded shut and door knobs had been removed and replaced with multiple locks. Saucer-size holes in inside doors were meant for circulation.

Another room, shared by Knight and Gina DeJesus, had a portable toilet, a clock radio and several chains.

The house, which quickly became a drive-by attraction after the women fled to freedom, was fenced off and kept under 24-hour police guard amid arson threats.