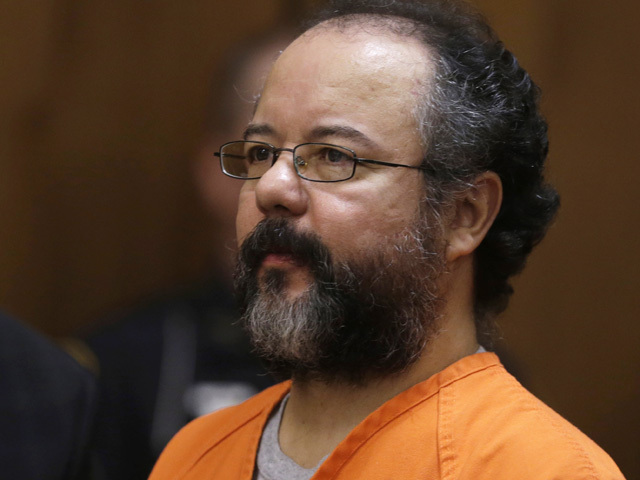 During an interview after the women were rescued, Castro, he said, answered questions succinctly, describing himself as a "sexual predator."

"We initially talked about how he did it, and then we got into why," Jacobs said. "His response was to purely satisfy his sexual needs."

Numerous witnesses testified for prosecutors during Castro's sentencing hearing Thursday morning. They outlined how he abducted the women from the same Cleveland street and held them captive for about ten years. He also kept their captivity secret from friends, family and the community. Prosecutors then displayed photographs of the interior of the home and used a model of the structure as witnesses detailed how Castro restrained the women and abused them psychologically and physically.

Speaking briefly before the hearing began, Castro said he wanted to apologize to the victims, but that he would do it "at the end of the day."

Castro pleaded guilty July 26 in a plea deal that spares him from the death penalty. Prosecutors recommended a sentence of life without parole plus 1,000 years. On Thursday, a judge will decide whether to accept the sentence. The sentencing hearing was still ongoing just before noon.

Castro has an "significant undiagnosed mental illness," but that "those factors will never justify his crimes," Weintraub said.

"They were very dark days inside a world they did not choose," Weintraub said.

As the hearing got underway, Weintraub objected to the state introducing evidence including graphic photos, chains, and the model of the home.

"Those graphic facts were best suited for a trial, which we agreed to avoid to protect the integrity of [the victim's] privacy," Weintraub said.

Taking the stand, a Cleveland police officer, Barbara Johnson, described entering a dark house the evening of the 911 call. She said Michelle Knight "literally launched" herself into an officer's arms as they responded, and then, into her own.

She described the women as pale and thin.

"Michelle was so tiny I thought she was a little girl until I put her down and got a look at her and realized she was a grown woman," she said.

Johnson said she immediately called an ambulance because Knight was having difficulty breathing.

She said it "took a second" to recognize Gina DeJesus. "She was thinner and paler compared to the pictures you've seen of her for the last ten years," the officer said.

After leaving the home, Johnson recalled asking Amanda Berry whether she had left the house to go to the hospital to give birth to her daughter.

"She said, 'Oh no,' she had her daughter here at the house. 'Michelle delivered her for me.' I was just dumbfounded by that. I couldn't believe that," the officer said. "They said, 'Yeah, we placed a pool under her to help with the cleanup, so it wouldn't make such a mess.'"

Michelle Knight told her Ariel Castro threatened to kill her if the baby died.

A gun prosecutors say Ariel Castro used to threaten the women was shown in court Thursday. Joshua Barr, of the Ohio Bureau of Criminal Investigation, displayed the firearm in court, a .357 magnum caliber gun.

Prosecutors displayed a series of photos of the interior of the home. Andrew Burke, an FBI agent who testified, described the modifications to the home intended to keep its occupants captive.

The modifications included locks on the outside of doors, windows boarded-up from the inside, and an alarm system on the home's doors, he said.

Describing a photo of the interior of the front door, the agent said, "Those are a series of alarm clocks wired in a makeshift manner to create essentially an alarm system to the house."