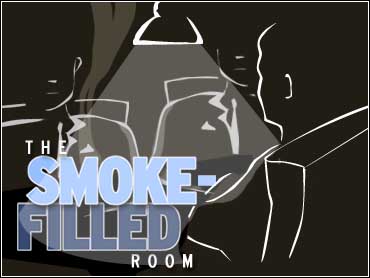 Republican pollster and political consultant Bill McInturff has the answers to your questions. McInturff served as pollster for Sen. John McCain’s recent Presidential campaign, and was instrumental in bringing about the “Harry and Louise” commercials about managed health-care. Veteran CBS News White House Correspondent Bill Plante brings a top political expert into the Smoke-Filled Room each week to answer your questions.

Plante: Sam and Kelly Martin would like to know “what it is it that makes John McCain such a popular politician?

McInturff: There’s a lot of reasons why Senator McCain struck the chord that he did with the electorate. First, having had an opportunity to work with him now on three campaigns, there just IS something intangible, which is why people just “like” him. John is an engaging guy who is comfortable with himself; there is little artifice about him, and people believe they can trust him. When you read what his classmates said about him, I think it really is true that he is a “natural leader” and these are all traits people see in him. After the Clinton era, John’s appeal to restoring trust in the White House and asking people to once again believe in “causes” greater than themselves” I also think had a special resonance. Finally, the policy positions he adopted on reform, Social Security, spending and his battle against the influence of special interests were popular, but were also supported by a personal biography that did suggest he would not back down from tough battles to get these things done.

Plante: Since John McCain has ruled himself out as a Vice Presidential candidate, whom do you think George Bush should pick as a running mate? Tanya would like to know.

McInturff: I strongly believe Governor Tom Ridge of Pennsylvania is by a wide margin the strongest choice Governor Bush could make. My other candidates would include Senator Chuck Hagel or Senator Fred Thompson. I don’t envy Governor Bush’s decision as our party is blessed with a number of governors all of who could serve quite capably as vice president.

Plante: Tierney questions, “Do you think the Million Mom March and the issue of gun control will play a very large part in this year’s Presidential race? How about at the congressional level?”

McInturff: Yes, gun control will be a big issue. The Democrats plan to use Governor Bush’ support for the right to carry a concealed weapon in Texas as a major issue. In general, the gun issue will be a major issue in most congressional races. The NRA has a formidable political operation and significant support. Governor Bush’s balanced approach on this issue, combined with an absolute commitment to stronger enforcement of existing gun laws suggests to me though this issue will end up as a raw (no pun intended) with perhaps even a slight edge to Governor Bush.

Plante: “Are you currently working on any advertisements like the Harry and Louise ones you did for the Health Insurance Association?” asks Kerry. “Don’t you think those commercials unnecessarily scared the American public about managed health care?”

McInturff: Well, I don’t think “Harry and Louise” focused much on the issue of managed care. These ads were designed to raise a series of questions about President Clinton’s health care proposal and they did that quite effectively. The questions we raised were actually pretty easy and any health care policy that would have worked should have been able to answer these questions. Given the emotion of the times, people asked me a lot then - as you are now - about whether this was an appropriate tactic. My strong believe is the president’s plan was badly, badly flawed. Had we tried to implement it, it would have made our health care system significantly worse and caused a great deal of harm. Finally, to the extent it raises questions about the American process where TV advertising can be this determinative about public policy and to the extent this seems a bit “crazy”, I would warn people and say, “if you think that’s crazy, wait until you see what Congress would do if it passed and was unpopular as I believe it would be.” Congress in panic is not a pretty sight. So, given my beliefs about the Clinton proposal, I am proud of the work we did. I am though very disappointed that Congress misread those results and has not moved forward with substantial private market based health care reforms, which clearly are needed.

Plante: What are your thoughts on privatizing social security?

McInturff: I strongly> support creating personal retirement accounts. I think over one or two generations it would positively transform this country as low- income workers would be able to keep and pass on their accumulated savings. However, youmust protect the current Social Security balances and you must be able to pay the very significant transition funds to make any serious proposal work. (Transition funds are needed because as workers are allowed to invest a portion of their taxes, it immediately reduces the amount going to the government. The money to pay people currently on Social Security has to continue to make this 20 to 30 year transition successful.)

Plante: What tips would you give Rep. Rick Lazio in his senate campaign against Hillary Clinton?

McInturff: Mrs. Clinton received 45% of the vote against an opponent with 100% name ID two weeks ago in a poll and received 46% against Congressman Lazio when he had less than 50% statewide name ID. From a pollster’s perspective, clearly, Mrs. Clinton is having trouble getting a majority of support in the state. This suggests to me people are actively looking for an attractive option to vote for other than Mrs. Clinton. Congressman Lazio has been appropriately aggressively spelling out their differences from his first speech, but I would also spend the summer making sure people find out about his own significant vision of what he wants to do as a US Senator.

Plante: What was the highlight of working on the McCain campaign?

McInturff: When John appealed to people to believe in “causes greater than their own self-interest,” I think I know for whom that had the most powerful appeal - me. I have spent 21 years in campaign politics because as I keep saying “I love America.” I am committed to my candidates and my work because I feel I have been some very small part of a series of policy ideas and changes that make our country stronger and better. John’s issue agenda, my pride every day in him as a candidate, and my overwhelming sense we could end this current presidency and replace Clinton with a genuine American hero are all things that do and will provide an enduring sense of pride about our mission. Finally, everyone in politics at their core want to stand with Henry V at Agincourt and hear the speech about “we few, we band of brothers.” With one exception, that’s how I feel about the men and women I got to work with for two years on this mission. It’s very rare that life offers you that kind of undiluted opportunity.

Plante: How do you explain the apparent collapse of support for Gore by most voting groups?

McInturff: Remember Gore’s “collapse” is a handful of points among groups he should be able to get back. This is a close race that should get significantly closer once the Democrats use all the soft money they have been raising to drive Bushs negatives up.

Plante: Do you think the “McCain vote” will automatically go to Bush? If not, why and who would get it?

McInturff: No, the McCain vote will not “automatically” go to Bush. We ended the campaign with the core McCain voter being the walking definition of who is a swing voter in America. These voters do not respond to partisan appeals. They are very driven by candidate personality and will be late deciders. Today they are roughly equally split on the Bush/Gore ballot. I don’t know where they’ll end up, but, I do know that whomever carries their vote will be the next president. John does not have the largest stack of chips on the board, but he’s holding the only chips left up for grabs in this election.

Plante: Frankie asks “What do you think will be the defining issue of Campaign 2000?”

McInturff: Well, I don’t know. National/foreign events tend to shape close campaigns in ways we cannot predict. But there’s a pretty good chance the issue of Social Security private accounts and how this issue breaks could be determinative.