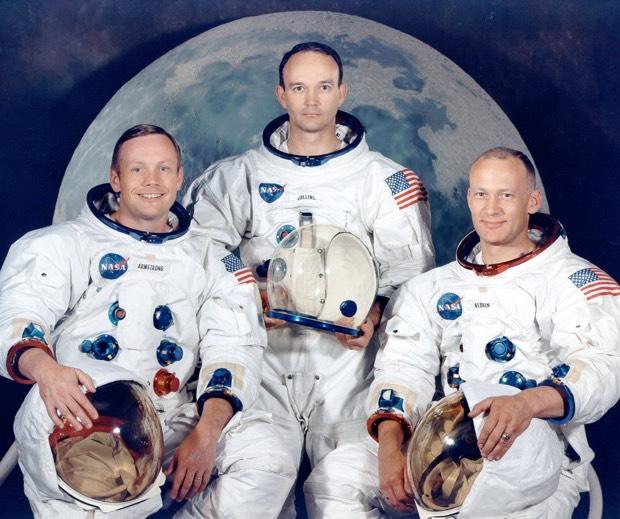 Fifty years ago Americans across the country were tuning in to watch three brave astronauts complete, "one small step for man, one giant leap for mankind."

After 21 and a half hours on the moon for a flag-planting ceremony, rock collection and general exploration the three men returned to Earth - splashing down about 900 miles southwest of Hawaii. Following the mandatory quarantine and the well-deserved ticker-tape parade Mission Commander Neil Armstrong, his colleague in the moon walk Colonel Edwin E. Aldrin, Jr., and Command Module Pilot Lieutenant Colonel Michael Collins joined Face the Nation for their first TV interview back on Earth.

During the hour-long episode the crew recounted their historic mission to the moon and reflected on what they had accomplished, all while keeping a cool demeanor about issues that had arisen on the mission. Guest Anchor Walter Cronkite pressed Collins on any nerves he might have had when there were issues with the docking procedure but Collins, as ever, stayed practical.

"I think it was more of a feeling that you finally grabbed a hold of this errant child and now he is kicking and struggling a little bit, and you know you still have him but you haven't quite gotten him into the bathtub yet," Collins said. "I thought perhaps at worst I would have to release the LEM and go back and initiate the docking process over again."

Armstrong showed a similar type of practical optimism when talking about the efforts being made to prevent Apollo 12 from over-shooting the landing, like Apollo 11 had done.

"It is a difficult procedure to control the trajectory of the spacecraft very accurately and start the descent at the proper point over the lunar surface," Armstong said. "With every flight we are improving our knowledge and understanding of that, and I think that we can expect good luck on hitting a particular spot on the moon in the future landings."

Transcript: Chris Coons and James Lankford on "Face the Nation"

Transcript: Nancy Pelosi on "Face the Nation"
Thanks for reading CBS NEWS.
Create your free account or log in
for more features.
View CBS News In
CBS News App Open
Chrome Safari Continue
Be the first to know
Get browser notifications for breaking news, live events, and exclusive reporting.