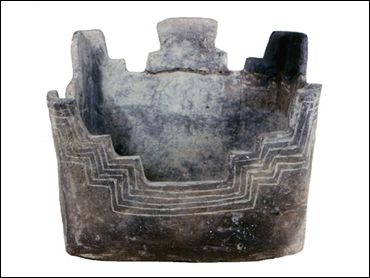 Hoping to solve an archaeological crime after more than two decades, the University of Alabama has revealed a major 1980 theft of Indian artifacts.

Jim Knight, chairman of anthropology at the Tuscaloosa campus, said Monday that the disappearance of 264 pottery vessels, dating back some 800 years, was the largest recorded antiquities theft in the South.

Knight said the theft, which occurred from a storage building at the university's Moundville archaeological site, was never made public; only a brief notice was placed in a scholarly journal.

The crime was probably silenced because of embarrassment and the belief that the stolen pottery was taken to collectors overseas and permanently out of reach, said Knight, who started work at Alabama the year after the heist.

Knight disagrees with that smuggling theory and said the bottles, bowls and jars may still be in the United States. He hopes that publicizing the crime will lead to the recovery of the items.

A university statement issued last week said the stolen items were appraised in 1980 at $1 million, which equals about $2.3 million today after inflation. The pieces included many of the best artifacts ever excavated at Moundville, an area near Tuscaloosa where mounds mark the site of an Indian community that dates back a thousand years.

The university recently posted a Web site about the theft, complete with photos of all the stolen items. The FBI was the lead law enforcement agency working on the case, but no one was arrested before the case went cold. FBI spokesman Craig Dahle said he was unfamiliar with the theft and could not find any mention of it in agency records.

University spokeswoman Cathy Andreen said she could find no record that the school did anything to make the general public aware of the loss. "None of the people who were working (at Moundville) then are there now," she said.

Once one of the largest communities in North America, Moundville was a 300-acre village on the banks of the Black Warrior River in central Alabama from about 1000 to 1450 A.D. The site is now an archaeological park operated by the university.

About 1,000 Mississippian Indians lived at Moundville at its height. As the village died out for unknown reasons, the area was left littered with pottery and other remnants of a highly organized society.

Items excavated from Moundville in the 1930s were stored in a locked, four-story repository at the site, Knight said. The theft was discovered 23 years ago when University of Michigan students researching the collection found boxes of artifacts lined up by a wall, waiting to be carried out.

"So much was taken I theorize there were at least a couple of trips that (the thieves) made, and they were planning at least one more," said Knight.

The loss was staggering: About 70 percent of the university's exhibit-quality artifacts were gone. Only the best items were taken, leading Knight to conclude that whoever took them knew what they were after.

Knight fears the items could wind up for sale on the Internet, where Native American artifacts have been sold on online auctions.