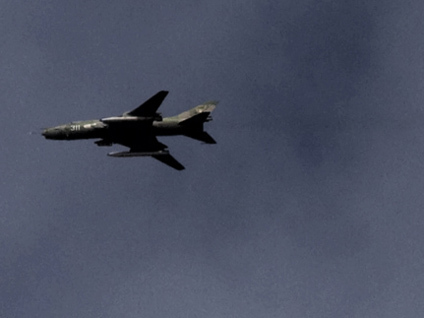 RAS LANOUF, Libya - Muammar Qaddafi tightened his grip Saturday on the coastal road linking his territory to the rebel-controlled east, pushing forward the front line in Libya's grueling internal conflict and showing off control of devastated towns just seized from the opposition.

The Arab League asked the U.N. Security Council to impose a no-fly zone over Libya to protect the rebels, increasing pressure on the U.S. and other Western powers to take action that most have expressed deep reservations about.

The 22-nation league said after an emergency meeting in Cairo that it was asking the United Nations "to carry out its responsibility."

Anticipating little international action, the rebels said they were trying to buy arms they would need if the now-fly zone was not imposed.

"If the international community chooses to play the role of bystander, watching all the Libyan people being killed and cities destroyed, then we will have to defend ourselves," Adbel-Hafidh Ghoga, a spokesman for the rebels' national council, told reporters in the eastern city of Benghazi.

The Libyan government took reporters by plane and bus to the town of Bin Jawwad, the scene of brutal battles six days ago between insurgents and Qaddafi loyalists using artillery, rockets and helicopter gunships.

A police station was completely destroyed, its windows shattered, walls blackened and burned and broken furniture inside. A nearby school had gaping holes in the roof and a wall. Homes nearby were empty and cars were overturned or left as charred hulks in the road.

Rubble filled the streets and a sulfurous smell hung in the air.

The tour continued in Ras Lanouf, an oil port of boxy, sand-colored buildings with satellite dishes on top.

The area was silent and devoid of any sign of life, with laundry still fluttering on lines strung across balconies. About 50 soldiers or militia members in 10 white Toyota pickups, holding up portraits of Qaddafi, smeared with mud as camouflage guarded it. A playground was strewn with bullet casings and medical supplies looted from a nearby pharmacy whose doors had been shot open.

The defeat at Ras Lanouf, which had been captured by rebels a week ago and only fell after days of fierce fighting and shelling, was a major setback for opposition forces who just a week ago held the entire eastern half of the country and were charging toward the capital.

A massive column of black smoke billowed from Ras Lanouf's blazing oil refinery. A Libyan colonel asserted the rebels had detonated it as they retreated.

Gen. Abdel-Fattah Younis, the country's interior minister before defecting, told The Associated Press that Qaddafi's forces had driven deeper into rebel territory than at any time since the opposition seized control of the east.

He said they were about 50 miles past Ras Lanouf and about 25 miles outside Brega, the site of a major oil terminal.

Younis vowed a comeback, saying "we should be back today or at the latest tomorrow."

But fewer rebel supporters were seen by an Associated Press reporter in the area, suggesting morale had taken a hit as the momentum shifted in favor of the regime.

Mustafa Abdul-Jalil, the head of the opposition's interim governing council based in Benghazi, pleaded with the international community to approve a no-fly zone over Libya to prevent Qaddafi's forces from launching air attacks and to impose restrictions that would bar the longtime Libya leader from bringing in more weapons and foreign fighters.

The rebels also sent a delegation to Cairo to lobby for a no-fly zone at the Arab League. Rebel spokeswoman Tahani Suleiman said the group had met with Arab League Secretary-General Amr Moussa and he had promised to support the idea.

Asked if he supports an international intervention in an Arab country, Moussa replied: "you are talking about ... a military intervention. I am talking about a humanitarian action. It is about standing by the Libyan people with a no-fly zone in their fight for freedom against an increasingly inhumane regime."

The European Union, which has said any such decision would need sufficient diplomatic backing from the Arab League and other regional organizations, sent its foreign policy chief, Catherine Ashton, to Cairo for the meeting.

The Obama administration has said a no-fly zone may have limited impact, and there is far from international agreement on it.

It would require U.S. and possibly allies' aircraft to first attack Libya's anti-aircraft defenses, a move tantamount to starting war.

Qaddafi has warned the United States and other Western powers not to intervene, saying thousands in his country would die and "we will turn Libya into another Vietnam."

Government forces also have recaptured the strategic town of Zawiya, near Tripoli, sealing off a corridor around the capital, which has been Qaddafi's main stronghold.

They took reporters Friday to Zawiya's main square, which had been a key center of resistance to the west of the capital. It bore the scars of battle and the streets were lined with tanks as loyalists waving green flags rallied amid a heavy presence of uniformed pro-Qaddafi troops and snipers. There was talk of rebel bodies having been bulldozed away, and the dome and minaret of the nearby mosque were demolished.