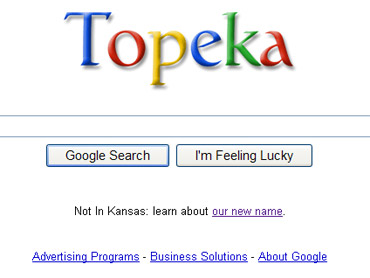 In keeping with its tradition of light-hearted homages to holidays and special events, Google has changed its name to Topeka for April Fool's Day.

The concept stems from the mayor of Topeka, Kansas declaring last month that he would temporarily rename the city to Google in an effort to persuade the search engine giant to test its new, ultra-fast fiber optics connection in Topeka.

Apparently, amid the search engine's bitter fight with China, it hasn't soured its sense of humor.

As the former Google explains on its blog: "We didn't reach this decision lightly; after all, we had a fair amount of brand equity tied up in our old name. But the more we surfed around (the former) Topeka's municipal website, the more kinship we felt with this fine city at the edge of the Great Plains."

The search engine does not say when or if it might change its name back to Google. For the time being, it says to label all correspondence as Topeka, Inc.

They also add: "Google employees once known as 'Googlers' should now be referred to as either 'Topekers' or 'Topekans,' depending on the result of a board meeting that's ongoing at this hour. Whatever the outcome, the conclusion is clear: we aren't in Google anymore."