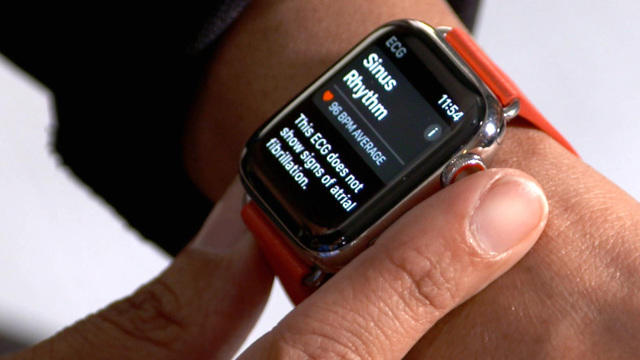 Apple is launching two new Apple Watch features on Thursday that could help save lives. An over-the-counter, FDA-cleared electrocardiogram is built into the body of the Apple Watch Series 4. According to Apple, this new test can detect atrial fibrillation, a condition where the heart beats out of rhythm.

Atrial fibrillation, also known as AFib, often has no symptoms but it can lead to a stroke. The ECG app is one of two new features that tracks it. The other periodically checks a user's heart rhythm and sends an alert if it detects an irregular rhythm.

Apple has sold more than 50 million smart watches since it rolled them out in 2015, and its new feature is tracking a disorder that affects at least 2.7 million Americans.

"You know, we didn't wake up one day and say, 'We made an iPhone and an iPad and now let's go after health care.' It really happened organically," said Apple's chief operating officer Jeff Williams.

Williams said they decided to focus on the heart first because Apple already has more heart rate monitors on people's wrists than anybody else in the world.

"We have tens of millions of heart rate monitors. We originally put the heart rate monitor on just to track your activity. We didn't put it on as a medical device," Williams said. "But the more we started getting letters where people said it detected something serious and in some cases helped save their lives, the more we realized we have a huge opportunity to do so."

But with that ability to monitor your heart comes concerns about who has access to our health data and what can be done with that information.

"We care deeply about privacy and so with our technology all your health information including these ECGs are stored encrypted on your device and encrypted in the cloud should you back it up. And you alone decide who you share it with. Period," Williams said.

Williams also said there could be false AFib readings, but argues that the impact of how it could help supersedes that concern.

"We have gone through this very, very carefully and thoughtfully but there will be some false positives. We think the impact on the other side far outweighs that," he said.

"AFib is a big deal. It affects millions of Americans, increases hospitalization rates. Over 700,000 hospitalizations a year. It increases death and heart failure [and] stroke. Strokes can be debilitating and life-altering. It increases stroke risk by five times. The problem with AFib is that it can be asymptomatic. You can be walking around and not know you have it while you're at increased risk for stroke," Narula said.

While Narula overall sees this technology as a step forward in empowering people to take control of their health, she also notes there are some downsides.

"Anxiety, false positives, flooding doctors' offices with calls. There are definitely downsides, but I think this has the potential to really be very helpful down the road," she said.