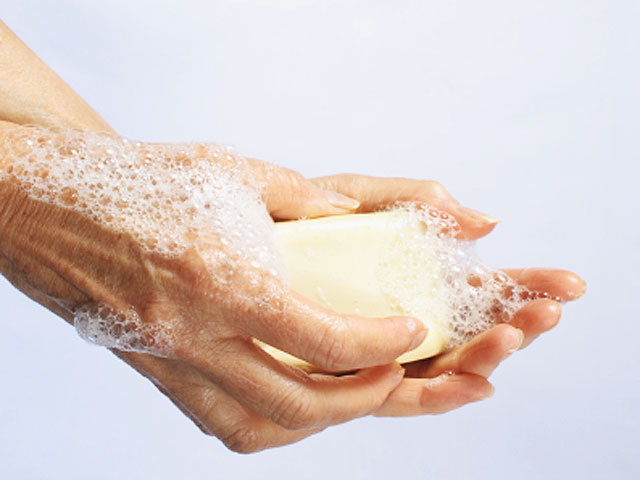 (CBS News) A chemical found in many antibacterial soaps, deodorants and mouthwashes has been shown in a new study to restrict muscle contractions in mice and fish, leading researchers to ponder what the results can mean for humans.

"These findings provide strong evidence that the chemical is of concern to both human and environmental health," principle investigator of the study Isaac Pessah, professor and chair of the Department of Molecular Biosciences in the UC Davis School of Veterinary Medicine, said in the press release.

Triclosan is an antibacterial chemical that is found in many household items and throughout the environment. The Environmental Protection Agency in 1998 estimated that more than 1 million pounds of triclosan were produced annually in the United States. Pessah added to FoxNews.com that the compound is being found increasingly in human bodies, including in plasma, urine and breast milk, due to higher production. Because factories aren't able to contain all of the chemical, it's also leaking more and more into the environment.

"[Companies] try to prevent some chemicals getting out past the water treatment plants so they can dispose of them in a different way, but they can't capture all of [triclosan] because there is so much of it," he told FoxNews.com

Researchers first tested triclosan's effects on isolated heart muscle cells and skeletal muscle fibers from humans. Normally, electrical stimulation should cause the muscle cells to contract in a process known as "excitation-contraction coupling" (ECC). The process is the basic function that allows muscle movement. When triclosan was introduced, the communication channels were blocked, which would theoretically lead to causing skeletal and cardiac muscle failure.

"Excitation-contraction coupling is essential for muscle contraction," Pessah said to FoxNews.com. "If you interfere with that process, it can be lethal and certainly debilitating. We were very surprised that triclosan essentially impaired ECC in both cardiac muscle cells and skeletal muscle cells...It did so at relatively low concentrations and relatively quickly."

Then, researchers exposed mice to similar levels of triclosan that people are exposed to on a daily basis through using household products. According to ScienceNews.org, at first they tried to inject a dose that was less than 1 percent of what is considered to be lethal to animals into a mouse. The first mouse died of heart failure within a minute.

Lowering the dose, they tested the rest of the mice and found out that the chemical reduced the heart's ability to circulate blood and also reduced leg-muscle strength. Mice under anesthesia had up to a 25 percent reduction in heart function measures within 20 minutes of exposure to the chemical. The mice had an 18 percent reduction in grip strength - a marker of how strong the mice's limbs are - for up to 60 minutes after being administered the drug.

"The effects of triclosan on cardiac function were really dramatic," study co-author Dr. Nipavan Chiamvimonvat, professor of cardiovascular medicine at UC Davis, said in the press release. "Although triclosan is not regulated as a drug, this compound acts like a potent cardiac depressant in our models."

After, they tested the drug on fathead minnows, a small fish typically used in experiments to show the effect on certain substances animals living in the environment. The triclosan was placed in the fish's water for seven days. The fish had significantly reduced swimming activity, both in normal swimming activity and in tests that mimic what it would be like for the fish if they were being chased by a predator. However, the minnows still had similar response rates to fish that were not exposed to the chemical.

Study co-author Dr. Bruce Hammock, a professor in the University of California Davis' Department of Entomology, said that the scientists were surprised to see how much triclosan affected the animals.

"You can imagine in animals that depend so totally on muscle activity that even a 10 percent reduction in ability can make a real difference in their survival," he commented in the press release.

Previously, the UC Davis research team had linked the agent to disruption of reproductive hormone activity and of cell signaling in the brain. While taking animal results and interpreting them from humans is a big step, Pessah pointed out that in the past, researchers have claimed that triclosan is safe but that may not be completely true.

Triclosan binds to blood proteins and is easily expelled through urine or other body processes, which is why it typically considered to be harmless to humans. However, for people who do not metabolize the agent quickly, it can remain in the blood for quite some time. Also, some of the experiments the researchers conducted was done with blood proteins available, and even though the triclosan was binding to them, it still disrupted the muscle activity. However, most concerning is the fact that people with heart conditions may be more affected by exposure because of their weakened muscle state.

The FDA is aware that there are concerns over how triclosan has affected animals in studies and how it may contribute to antibacterial resistance. The agency is reviewing the safety of triclosan in the products it regulates but mentioned that it has not yet been proven to be harmful to humans.

But, the study researchers disagree, saying that a triclosan should be given an even closer look.

"We have shown that triclosan potently impairs muscle functions by interfering with signaling between two proteins that are of fundamental importance to life," Pessah said in the press release. "Regulatory agencies should definitely be reconsidering whether it should be allowed in consumer products."

The study was published online in the the Proceedings of the National Academy of Sciences on August 13.