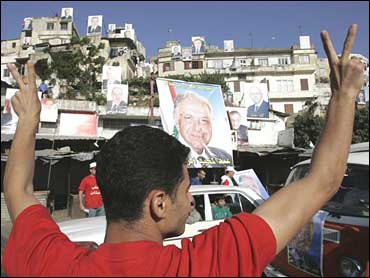 Pro-Syrian candidates appeared headed for defeat Sunday in Lebanon's first free elections in three decades - a win that would break Damascus' longtime domination of Lebanese political life and its parliament.

A pro-Syrian leader acknowledged a major defeat for his candidates and an anti-Syrian opposition official said the ticket's unofficial results indicated a near sweep in the contest for 28 parliamentary seats in northern Lebanon.

Suleiman Franjieh, a Christian former interior minister who is close to the family of Syrian President Bashar Assad, said: "We bow to the will of the people."

Whatever the outcome, however, the Christian-Muslim solidarity that emerged after the February assassination of former Prime Minister Rafik Hariri has been deeply marred by sectarian divisions. The divide has only become more acute in the heated competition leading to the final round of voting in the north of the eastern Mediterranean country.

The ticket led by the slain prime minister's son, Saad Hariri, must win 21 of the 28 seats in the Sunday vote to gain a majority in the 128-member body.

"We're ahead and we're very optimistic," an official in Saad Hariri's camp said after their count indicated they were winning. The official insisted on anonymity because the final results are not out yet.

The unofficial tally by the campaigns of tickets backed by Hariri appeared to guarantee the opposition a majority in the new legislature and break the hold Syria has held in the outgoing parliament for more than a decade. The Syrian army withdrew from Lebanon in April.

Walid Jumblatt, the Druse opposition leader and ally of Hariri who was among the most vocal against Syrian control, declared victory.

"We have triumphed in the north," he said, calling the pro-Syrians in parliament "nothing but a bad minority."

There was no independent estimate of the early results, however, and official results were not expected before Monday.

Troops and police patrolled the streets as voters cast ballots in coastal towns, remote villages near the Syrian border and in the biblical Cedar mountains of the north. Candidates' supporters drove through cities and farming towns as polls opened, honking horns and waving posters and party flags.

About 680,000 men and women were eligible to vote Sunday.

Hariri's rival, Michel Aoun, thwarted the anti-Syrian bid to quickly rack up a majority in earlier rounds of voting. Aoun was previously allied with the opposition but then broke with it to link with a coalition of anti- and pro-Syrian figures. He made a surprisingly strong showing in Christian areas during voting last week.

Out of 100 seats decided in previous rounds of voting since May 29, the opposition holds 44. Aoun and allies currently hold 21 seats. The pro-Syrian Shiite Muslim groups Amal and Hezbollah, along with their allies, have clinched 35 seats.

Montasser Kaddour, a 52-year-old government employee in Tripoli, said he voted for the Hariri-backed list because its candidates represent "moderation and reconciliation." He said Hariri was the only one who could save Lebanon.

In the Christian town of Zghorta, a 43-year-old housewife said she was voting for "Lebanon's only honest man," referring to Hariri's opponent, former military commander and exile Aoun. She asked to be identified only by her first name, Hiam, because she said some candidates expected her to vote differently.

The election is Lebanon's first ballot free of a Syrian troop presence. Those forces were pulled out under intense international pressure in April, ending a 29-year military presence that began in the first year of Lebanon's civil war.

But the election was bitterly fought, with rival candidates accusing each other of vote-buying and incitement. Opponents of Hariri, a Sunni, accused him of trying to appeal to the north's slight Sunni Muslim majority against his top rival, the Christian Aoun, and of stirring up religious differences.

Hariri, who was also accused of employing his vast wealth in the campaign, denied the accusations and said his was the only valid electoral program whereas the others "want to lead the country to destruction."

Franjieh claimed opponents have spent $35 million in the campaign against him.

Still, in Lebanon's shaken political landscape, the lines were not so clear cut: Hariri's allies in the north include the most right-wing of Christians - the Lebanese Forces group who have their stronghold in the mountain town of Becharre, ancestral home of the American philosopher Kahlil Gibran.

Aoun, who returned in May after 14 years of exile in France, allied himself with some of the region's traditional pro-Syrian leaders, including the Muslim family of former Premier Omar Karami and Franjieh.

The elections have been a messy conclusion to Lebanon's dramatic upheaval since Rafik Hariri's slaying in a bomb blast in Beirut. The assassination, blamed by the opposition on Syria and its Lebanese allies, prompted unprecedented anti-Damascus protests that helped push Syria into withdrawing its military.