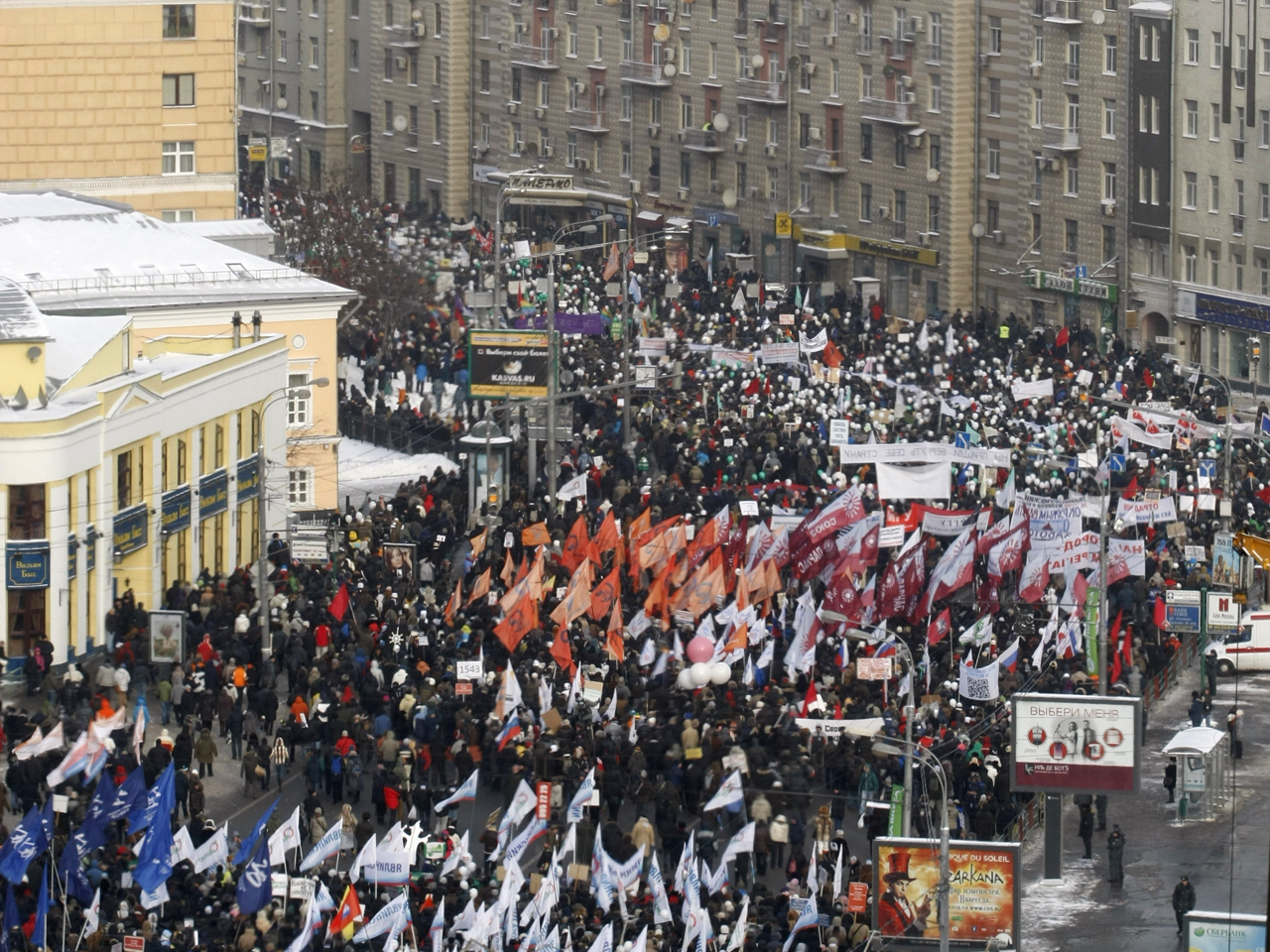 Saturday's crowd appeared to be even bigger than two similar rallies held in December, despite temperatures plunging to minus 4 Fahrenheit.

CBS News correspondent Elizabeth Palmer, braving the bitter cold along with throngs of Russian protesters, says organizers of the day of protests vowed to keep their speeches short, and they have been giving advice all week on how people should dress to protect themselves from the frosty air.

After gathering in columns behind banners of various groups calling for democratic change in Moscow's Oktyabrskaya Square, where one of the few remaining large statues of Lenin still stands, Palmer says they were all to march about a mile to a park on the banks of the Moscow River - about a half mile from the Kremlin.

There have been no suggestions the demonstrations will likely turn rowdy or violent. Palmer says the Russian authorities are taking a largely hands-off approach - knowing that if there is any interference or aggression it would likely only lend the opposition movement more momentum.

The previous rallies — the second of which drew 120,000 people, according to organizers — were the biggest in Russia since the protests 20 years ago that paved the way to the collapse of the Soviet Union.

The authorities have sanctioned Saturday's march, even though they had rejected the organizers' earlier request to gather just outside the Kremlin.

"So many of us have come that they can's arrest all of us," said 56-year old protester Alexander Zelensky.

He and his wife, Alyona Karimova, said they had begun preparations to emigrate to Canada in the fall, but then changed their minds and decided to stay in the hope that the nation will eventually move toward democracy.

"This is going to be a gradual process, but we believe it will eventually lead to democracy and free elections," Karimova said. Protesters chanted "Putin, go away!" and "Russia without Putin!" Communists and nationalists also joined the protest, waving big flags.

The protests in December were triggered by evidence of fraud in favor of Putin's party in December's parliamentary election. Putin has ignored the demands for a repeat election, but he has sought to assuage the mostly urban middle class protesters' anger by making vague promises of liberalization.

The group hopes that by posting Russian resident monitors in the polling booths around Moscow in March's national elections, they can force a clean vote - at least in the sprawling and politically crucial capital.

If the vote tally in Moscow shows significantly lower support for Putin and his party than it has in the past, the Citizen Observers movement will claim vindication and offer the discrepancy as evidence that the December voting was rigged.

Putin has sought to consolidate his core support group of blue-collar workers, farmers, public servants and the elderly with frequent meetings with pre-selected groups of people, which received lavish prime-time coverage on state-controlled nationwide television stations.

On Saturday, Putin's backers gathered across town in an apparent attempt to demonstrate a massive public support for his course, but the rally only drew about 15,000.

Municipal workers, union activists and teachers who showed up there said they came of their own will, but some admitted they had been asked by authorities to attend.