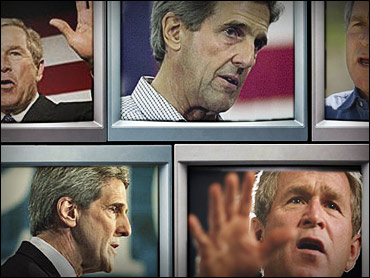 The Democratic Party and 18 senators are objecting to a broadcasting company's plan to air on 62 TV stations a critical documentary about John Kerry's anti-war activities after he returned home from Vietnam three decades ago.

Sinclair Broadcast Group has asked its television stations — many of them in competitive states in the presidential election — to pre-empt regular programming to run the documentary as part of an hourlong program two weeks before the Nov. 2 election.

Based near Baltimore, the company owns or manages affiliates of major broadcast networks in several states, including Ohio, Florida and Pennsylvania.

Mark Hyman, a vice president of corporate relations for Sinclair who also is a conservative commentator for the company, said Monday the show would contain some or all of the 42-minute film as well as a panel discussion of some sort. He said final details had not been worked out.

The documentary, "Stolen Honor: Wounds That Never Heal," chronicles Kerry's 1971 testimony before Congress and links him to activist and actress Jane Fonda. It includes interviews with Vietnam prisoners of war and their wives who claim Kerry's testimony — filled with "lurid fantasies of butchery in Vietnam" on the part of U.S. troops — demeaned them and led their captors to hold them longer.

The Democratic National Committee planned to file a complaint with the Federal Election Commission on Tuesday contending that Sinclair's airing of the film should be considered an illegal in-kind contribution to President Bush's campaign. Also, 18 Democratic senators sent a letter to the Federal Communication Commission asking that it investigate whether Sinclair's plan was an improper use of public airwaves.

However, Sinclair's Hyman said, "The documentary is just a part of a special news event that we're putting together. We've invited one person to be a guest. That's Senator John Kerry." The company posted a note on its Web site Monday afternoon urging people to call Kerry's headquarters to urge his participation.

Chad Clanton, a Kerry campaign spokesman, said, "Everything is on the table but it's hard to take an offer seriously from a group with such a fierce partisan agenda, a group that's clearly not interested in the truth."

Democratic National Committee Chairman Terry McAuliffe said the company was acting as a mouthpiece for the Republican Party rather than a legitimate news outlet.

"In this election cycle, they have put their money where their right-wing mouths are," he said. "Sinclair's owners aren't interested in news. They're interested in pro-Bush propaganda."

Campaign finance records show that company's executives have donated thousands of dollars to Bush's campaign. In April, the company was in the news for refusing to run a "Nightline" show in which hundreds of names of American troops killed in Iraq were read by ABC anchor Ted Koppel.

Hyman called the allegations about the documentary "absolutely absurd."

Carlton Sherwood, a Vietnam veteran and former journalist who made the film, said Monday that he felt the media had not explored the period of Kerry's life after his return from Vietnam, including when he testified before the Senate Foreign Relations Committee alleging atrocities in Vietnam.

"For 33 years, we've been saying that how Kerry portrayed us was utterly false. It was purgatory of the worst kind. It was slander," Sherwood said. "But no one wanted to talk about it. Everybody ran for cover."

Sherwood, based in Harrisburg, Pa., is a friend and one-time aide to former Pennsylvania Gov. Tom Ridge, a fellow Vietnam veteran who is now secretary of the U.S. Department of Homeland Security. Sherwood said he and Ridge have not spoken since beginning the film project.

He said it took six weeks to make the film, and that Sinclair contacted him last month after it was completed. Sherwood said he was told last week of the company's plan to run it, and that the company was not compensating him for the film.