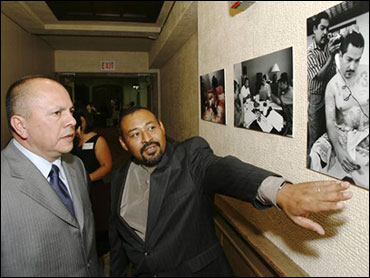 A man who said he left a ruthless street gang in Central America and later won praise for his anti-gang work in Los Angeles was arrested Wednesday by authorities who allege he conspired to kill a rival even as he spoke out against gang life.

Alex Sanchez, 37, who heads the local office of the nonprofit Homies Unidos anti-gang group, was taken into custody at his Bellflower home on federal racketeering charges, authorities said.

The indictment names 24 leaders, members and associates of MS-13, part of the Mara Salvatrucha gang affiliated with the Mexican Mafia prison gang.

It alleges crimes that include seven murders, eight conspiracies to commit murder, and gun and narcotics offenses since 1995. Sixteen of those named were already in custody. Four others, including Sanchez, were arrested Wednesday.

The alleged crimes by Sanchez occurred after he returned from El Salvador in 1996 and publicly decried gang life.

The indictment said he went by the nickname Rebelde, or rebel, and was a shot-caller for the Normandie contingent of MS-13. He and three others are accused in the indictment of conspiring to murder a man identified by authorities as Walter Lacinos "for the purpose of maintaining and increasing their position in MS-13."

In May 2006, Lacinos was killed in El Salvador.

No other details were provided in the indictment. Chief Assistant U.S. Attorney George Cardona declined to provide any specifics beyond the court filing.

Mara Salvatrucha was formed in Los Angeles in the mid-1980s by immigrants fleeing the El Salvador civil war. The gang spread as members were deported to their home country and is now a major international criminal enterprise known for callous killings carried out by its members, many of whom are heavily tattooed with shaved heads.

Five others named in the indictment, not including Sanchez, conspired to murder a veteran gang detective with the Los Angeles Police Department, authorities said.

Known as an anti-gang worker, Sanchez has testified as an expert witness in criminal cases, lobbied for better intervention and prevention programs, spoken to youths about the depressing consequences of gang life and been widely quoted in the media, including by The Associated Press.

Sanchez appeared in court Wednesday, and a judge granted a request by Sanchez's court-appointed attorney for his bail hearing to be rescheduled for Tuesday, Assistant U.S. Attorney Elizabeth Carpenter said. His arraignment was set for Monday, she said.

Luis Enrique Guzman, a community organizer at the Los Angeles Homies Unidos office, said the group would have no immediate comment.

Luis Romero, director of the Homies Unidos office in El Salvador, said the organization did not accept the allegations against Sanchez.

"We know that Homies Unidos U.S.A. is doing great work in the reinsertion and rehabilitation of young people," Romero said.

He said he had no details on the charges.

Asked what he thought prompted the allegations, he said, "these are the famous smoke screens, things that they use, things that they have not been able to solve and they take action without previously investigating."

Sanchez arrived in Los Angeles at age 7 from El Salvador and joined Mara Salvatrucha when he was 14. He was jailed three times for minor offenses and deported to El Salvador in 1994.

He told the AP in a March interview that in his home country he had to live on the streets, fleeing death squads and gangs who threatened to kill him because they believed him a rival.

He returned illegally to Los Angeles in 1995. Authorities tried to deport him a second time, but he was granted political asylum after saying police picked him up because he had testified against officers in the Rampart police corruption scandal.

Several people spoke in his defense, including Tom Hayden, a former student radical and state senator.

In July 2002, Sanchez received political asylum after officials determined his life would be in danger if he returned to El Salvador.

It was the latest instance in which an anti-gang advocate has been arrested. In January, Marlo "Bow Wow" Jones was arrested in the robbing and beating of a rapper with the musical group Bone Thugs-N-Harmony in his Universal City hotel room. At the time, Jones was working as a gang intervention worker.

"The best ones are the ones who have completely gotten out of the life, but kept the relationships and still are respected," she said. "But they are the exception and not the rule. Most of these guys are go-betweens, some act as buffers and some are still in the gang."

Rice said she had wondered about Sanchez because he had been absent from community meetings aimed at reducing MS-13 violence.

"The thing that makes it really complicated is that Alex did really good work," she said. "He helped a lot of kids, put a lot of kids in school."

The office has helped remove tattoos from more than 240 gang members.

FBI officials said everyone named on the indictment could face up to 25 years to life in prison, while those charged with murder could face the death penalty. No one else from Homies Unidos was named in the indictment.