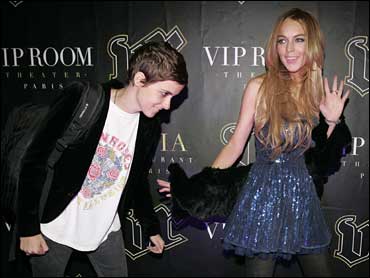 U.S. actress Lindsay Lohan was pelted with a flour bomb upon arrival at a Paris nightclub wearing a fur stole.

Animal rights activists showered the 22-year-old actress with flour when she went to the VIP Room Theater in the early hours of Saturday with her friend, disc jockey Samantha Ronson.

The owner of the nightclub helped Lohan dust off her blue sequined dress and black stole before she posed on the red carpet.

Ronson went on to spin tracks for a crowd that included reggae rapper Shaggy and "I Kissed a Girl" singer Katy Perry.

Earlier this year People for the Ethical Treatment of Animals named Lohan to its list of the "Worst-Dressed" Celebrities of 2008, citing the actress and others for wearing furs, snakeskin and other apparel made from animals.

Robbie LeBlanc of PETA Europe said of the incident, "Lindsay Lohan might be able to ignore images of bloody animals skinned alive for their pelts, but we hope a dash of flour will help her rise to the occasion and forsake fur once and for all."

Lohan sparked a different controversy earlier this week following an interview where she referred to President-elect Barack Obama in a TV interview as the country's "first colored president."

Describing her experience on Election Day on the show "Access Hollywood," Lohan said: "It was really exciting. It's an amazing feeling. It's our first colored president."

Interviewer Maria Menounos didn't question the 22-year-old actress on her use of the term, which dates back to the period when blacks were legally discriminated against. "Access Hollywood" also didn't cite her remark in its online story, but did post an "extended interview" video on its Web site that included the remark.

A spokesman for the syndicated entertainment news program said in a statement Wednesday: "We believe the word in question that Ms. Lohan used was unintelligible."

Lohan blogged about her support of Obama during the presidential campaign.