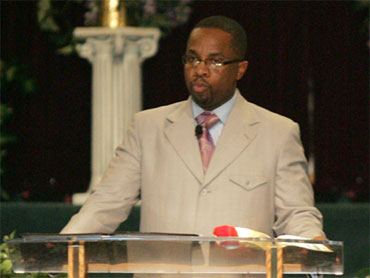 A pastor who barred church officials from using Facebook, saying it can lead to adultery, will take a 90-day sabbatical and return to his post, a church elder announced Sunday. The decision follows the pastor's admission that he engaged in a three-way sexual relationship a decade ago.

Leaders at the Living Word Christian Fellowship Church in Neptune gave the Rev. Cedric Miller a vote of confidence as the church's spiritual leader during a meeting Monday, Associate Reverend Linda Parreott said during church services.

The unanimous decision came after "prayer and thoughtful consideration" by the church's board of elders, along with recommendations from other local pastors, she said.

Church leaders had not commented publicly on his status until Sunday.

Miller first made headlines earlier this month when he urged congregants to drop their Facebook accounts because he believes the social networking site facilitates affairs.

He recently ordered about 50 married church officials to delete their Facebook accounts or resign from their leadership positions. He also suggested that married members of the congregation do the same and said he was deleting his own account.

Miller said he made the request because 20 couples among the 1,100 members of his flock had run into marital trouble over the last six months after a spouse connected with an ex-flame over Facebook.

While addressing his congregation during Sunday's service, Miller said he has no intention of relinquishing his crusade against the purported evils of Facebook.

"You want to log on? Log onto God's words," Miller said while holding up the Bible. "Get your face in this book."

Facebook has not commented on Miller's statements about the social networking site.