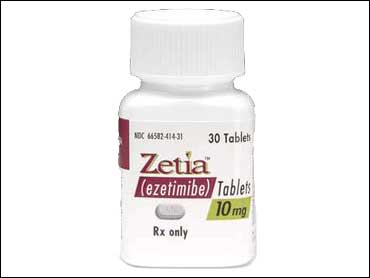 The delayed Enhance study results had been anticipated with caution by Wall Street, with analysts saying data on both safety and effectiveness have the potential to impact future sales. While Vytorin reduced levels of "bad" cholesterol much more than Zocor in the study and was shown to be safe and well-tolerated, it ultimately failed to lower the level of artery-clogging plaque.

Vytorin, which had sales of nearly $2 billion in 2006, is a combination of Schering-Plough's Zetia and Merck's Zocor, which lost patent protection in 2006.

Dr. Steven Nissen, chairman of cardiology at the Cleveland Clinic, told CBS News anchor Katie Couric that he would advise doctors to quit prescribing Vytorin, since it was not shown to be more effective than Zocor.

"My advice to physicians is not to use this drug Vytorin nor to use Zetia as first line agents any more. These should be really relegated to drugs of last resort until we have some evidence that they produce a health outcomes benefit," he said. "Right now, five years into this, with nearly 1 million prescriptions per week being written, there is no evidence that the drugs actually produce any benefit for patients."

However, Nissen urged consumers to talk to their doctors before stopping the drug.

"People should talk to their doctor. No one should stop taking medication because they hear a news report," Nissen said.

The study focused on a group of 720 patients with a rare condition predisposing them to high cholesterol. They were given either Vytorin or a high dose of generic Zocor, known as simvastatin.

Safety concerns about liver damage have hovered over Vytorin amid a stricter regulatory atmosphere. In December, a congressional committee requested more information on the Enhance study, which began in 2002. The results were delayed, the companies maintained, because of the complexity of the data. In addition to Enhance, the companies are conducting three additional studies involving more than 20,000 high-risk patients.

Despite the data, Goldman Sachs analyst James Kelly reaffirmed a "Buy" rating on Schering-Plough, calling the results a "non-event" which doesn't represent Vytorin's commercial prospects. He said the results reaffirmed the drug's safety, which had been the key concern of Wall Street.

Earlier in January, Merck Chief Executive Richard T. Clark was similarly confident in reaffirming his expectation that Vytorin would maintain its position in the cholesterol drug market.

However, Banc of America Securities analyst Chris Schott reaffirmed a "Neutral" rating on Schering-Plough with a price target of $32. He said the results raise several questions about Vytorin's effectiveness, which will likely go unanswered until the company presents the data at the annual American College of Cardiology meeting in March.

"We view this as a double-edged sword," Schott said, in a note to investors. "While positive for Vytorin, Enhance also supports safety of the high 80-milligram dose of generic Zocor."

Elsewhere in the sector, Pfizer Inc. is facing yet another challenge to Lipitor, the world's best-selling drug. The basic patent for the cholesterol drug is now under review by the U.S. Patent & Trademark office at the request of Ranbaxy Laboratories Ltd., which is seeking to make a generic version.

The drug had sales of $12.89 billion in 2006. Pfizer is appealing the decision and said the patent will remain protected throughout the lengthy review process. Lipitor's patent is set to expire in 2010.