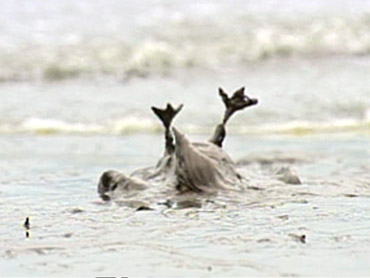 An anthrax outbreak has killed 194 hippos in western Uganda, wildlife officials said Tuesday, and scientists are struggling to develop a way to quickly diagnose and contain the disease.

The first hippos died in late July in Queen Elizabeth National Park, but it took months of research and testing to determine the cause, said John Bosco Nuwe, the park's chief warden. The disease has also killed 14 buffalos, he said.

"We are vaccinating the livestock around the park or those in close proximity," Nuwe said. "We're telling people not to panic and stop eating hippo meat."

Scientists from the Robert Koch Institute in Berlin identified the disease as anthrax, a soil-borne disease caused by the Bacillus Anthracis bacterium. The bacteria produces toxic pores that remain in the soil for years and which kill animals. Symptoms include high fever and bleeding.

Fabian Leendertz, an expert from the Max Planck Institute of Evolutionary Anthropology in Leipzig, Germany, has joined a task force to fight the epidemic.

He will help identify anthrax strains, determine contamination levels in the park's soil and water, as well as train Ugandan scientists on new methods of dealing with anthrax. The task force is being financed by the German aid agency GTZ.

While anthrax has been developed into a biological weapon, it exists naturally in most countries around the world.

Queen Elizabeth National Park is home to a wide variety of African wildlife and features vast savannas, crater lakes, geysers and hot springs. About 5,000 hippos, half of Uganda's total, live in the park, which makes up much of Uganda's border with Congo.