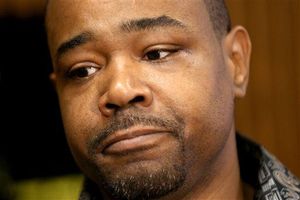 CLEVELAND - A man imprisoned for murder for nearly two decades was acquitted Tuesday as prosecutors in Cleveland dropped the charges against him but stopped short of conceding his innocence.

Anthony Lemons, 40, had sought to clear his name and said a burden was lifted from him as a Cuyahoga County judge acquitted him, The Plain Dealer of Cleveland reported. He said he will pursue state compensation for wrongful imprisonment and would use any such payment to start a program to help released inmates transition back to life outside prison.

"I hope that any man willing to stand up - tired of our community falling apart, tired of injustice, period - help me along the way," Lemons said.

Lemons was imprisoned for a 1994 shooting that authorities said was a dispute over drug money. He steadfastly denied involvement and was released on parole in December 2012. In granting a new trial last year, the judge had noted that police reports withheld from the defense during the original trial contained important information that could raise doubts about a key witness.

Among the issues: The witness said Lemons was wearing shoes that police later determined hadn't even been manufactured at the time. Assistant prosecutor Blaise Thomas said the office doesn't concede Lemons is innocent but couldn't go forward with the new trial because the eyewitness died and the judge wouldn't allow a transcript of her testimony to be used in the new case.

Lemons' next legal step could be pursuing a court declaration that he was wrongfully convicted, a necessary step in seeking compensation from the state.